Antisemitism is 'out of control', say Turkish Jews

Antisemitism is 'out of control', say Turkish Jews. They are afraid to leave the house and feel increasingly unsafe, Ynet News reports:

"We are afraid to walk down the street, as the atmosphere is very tense. Slogans supporting the Palestinians and against Israel are plastered on walls everywhere, and Palestinian flags can be seen all around. A Palestinian flag was even hung opposite the great synagogue in the Neve Shalom neighborhood where the major bombing occurred.

"Anti-Israel graffiti has been sprayed on Jewish-owned stores and Judaica stores. "We are very reluctant to get out of the house these days. On Shabbat the great synagogue stood almost empty. Many were worried that someone might hurt them, even though police security has been massively boosted. "Everywhere, in every street corner and on every TV show people talk of only one thing: Gaza.

"A minute of silence in memory of the Palestinian victims was held in all the schools. My friends' children felt very uncomfortable when they were asked to attend. They were also asked to donate money to the injured children in Gaza. Jewish families feel very strange with the kids bringing those envelops home. The parents know that if they don't send money with their children, they could suffer at school.

Prime Minister Erdogan's statements created a very unpleasant atmosphere for the Jews here, especially for the youth and children. At schools and in our workplaces we are confronted with harsh criticism about 'what your people have been doing in Gaza.' The hostility is felt not only from radical Muslims, but also from seculars, who are very critical. This has caused many of us to think of leaving Turkey and making aliyah to Israel."

Sheila, a new olah from Turkey, had always dreamed of getting married in Istanbul's magnificent Neveh Shalom synagogue. But rising antisemitism means she will be finding an alternative venue:

"I was engaged three months ago," said Sheila, who asked that her last name not be published out of fear for her family's safety, all of whom still live in the Turkish metropolis. "My fiance is Israeli, and his family no longer wants to go there for the wedding. On top of that, when my mother goes to the ministry offices [in Istanbul] to try and get the marriage forms filled out, they won't help her. They won't help her because she's Jewish."

Describing a "climate of fear" in her former hometown, the Turkish immigrant said she will most likely cancel her wedding plans.

"Frankly, I'm scared to have my wedding there now," she said. "On the one hand, yeah, it's my dream, but on the other hand, the situation there has simply gotten out of control."

"Every day it gets worse," Sheila continued. "My parents told me that a shopkeeper near one of the Jewish neighborhoods, where my grandparents live, put a sign in the window of his store that said, 'No Jews allowed, but dogs are welcome.'

"Even when my parents go to buy a phone card to call me, they get harassed by the shopkeepers the minute they say they're trying to make a call to Israel."

Sheila also said that during the war, billboards went up around town decrying the Israeli "crimes" in Gaza, and the government made students in every Turkish school stand for a moment of silence in solidarity with the children of Gaza.

"They even had to do it at the Jewish school I went to as a kid," Sheila said. "I can only imagine how uncomfortable the students must have felt." 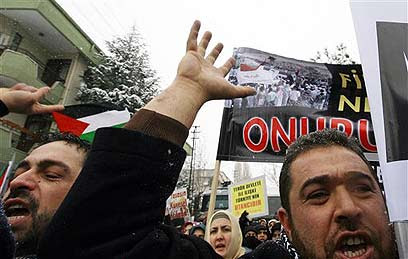