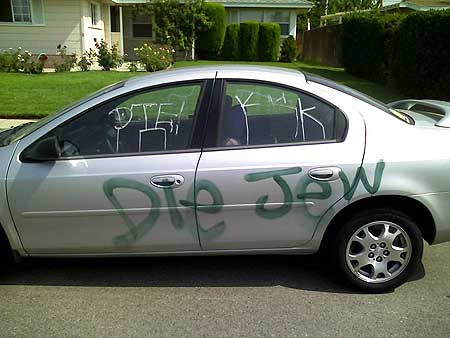 A French playwright called Boris Vian once wrote about a silent creature, swathed in slings and bandages, who skulks along the floor, in corners and under tables, and is intermittently kicked, whipped, stabbed, slapped and kneed in the groin by the characters on stage without provocation or comment. That creature Vian called le Schmurz.

In Europe the Jews have collectively become le Schmurz because of their 'responsibility' for Israel’s war in Gaza. A gang of youths ran down Golders Green High Street in London spraying graffiti and trying to get into shops and restaurants. A doctor was murdered in Paris and synagogues have been firebombed in England and Sweden and attacked in Toulouse, Toulon, Metz, Charleroi and Brussels, as well as a Jewish school in Brussels, cars and shops belonging to Jews in the Kremlin Bicetre (France), in Toulon (France), Brussels and Antwerp. To look like a Jew is provocation enough.

In Italy the Jewish community is ready to sue a union for proposing a campaign to ‘boycott’ Jewish shops.

When Salman Rushdie writes a controversial novel, when a Danish newspaper publishes 'inflammatory cartoons' or when Israel kills Palestinians in Gaza, infidels and Jews become fair game for a backlash. Jews do not go on the rampage in German shopping malls because of the Holocaust; despite claims of mounting Islamophobia, Americans did not riot after 9-11. Only Arabs and Muslims are expected to vent their anger and frustration and let it spill over against innocent third parties.

Nobody seems shocked that Hamas leader Mahmoud Zahar has advocated the murder of Jewish children around the world or that Al Qaeda’s Ayman al-Zawahiri has demanded that Muslims attack “Zionist interests” worldwide. The anger of Arabs and Muslims is now being invoked as an instrument to influence western foreign policy. Governments have only themselves to blame if Muslims become radicalised as a result.

Is the backlash a new phenomenon? Has it to do with the islamicisation of European antisemitism ?

We have been here before. In the Arab world, Jews had long been on the receiving end of Muslim or Arab anger. Hundreds died in sporadic pogroms in 19th century Morocco, in the 1941 Iraqi Farhoud and in Libya in 1945. Boycotts were a hallmark of Nazi Europe, but they were also attempted boycotts on Jewish shops and businesses in Lebanon, Iraq and Morocco.

Every anniversary of the Balfour declaration, mobs went on the rampage. It happened in Cairo, Alexandria and Tripoli. Some of the worst violence took place following the approval of the UN Partition plan in November 1947. The Jewish quarter of Damascus was attacked; 82 Jews were murdered in Aden. While the first Israel-Arab war was in progress, Egyptians turned their anger on their Jews in 1948; a mob rioted in Beirut, Baghdad, Damascus, Oujda and Djerrada in Morocco. Dozens of Jews were murdered. In 1967, the mobs turned on the Jews once again in Lebanon, Iraq, Syria, Tunisia and Morocco.

Some of it was official incitement. Some of it was popular feeling whipped up by the media, the mosque, or politicians. The Tunisians, and Moroccan and Bahraini monarchs, strove to control popular fanaticism. But Libya, Syria, Egypt and Iraq actually fanned the flames of hatred.

The phenomenon of rent-a-mob paid protestors is familiar in the Arab and Muslim world. When Sir Alfred Mond visited Baghdad in 1928, a group of protestors was instructed to shout 'Down with Zionism' (Yuskut al-Ziyoniyya). Except that, not knowing what Ziyoniyya was, they were shouting Yuskut al-paswaniyya - 'Down with the security tax'. So much for the spontaneous anger of the Arab street.

Sometimes, the government does not cause the trouble, but does nothing to stop it. The police arrive too late on the scene. The Jews are left with the sinking feeling that the state is not prepared to protect them.

Bat Ye'or's explanation is that "the Arab-Israeli conflict released a latent hatred, formerly held in check by the Western colonial administration. Sporadic, like a recurrent fever, it worsened in the 1950s and the 1960s awakening the tradition among the populace to plunder and kill the dhimmis with impunity...The Arab nationalists who released these collective passions spoke the same language of hatred and contempt as in past centuries. " (p178, Islam and dhimmitude).

One would be wrong to consider these repeated raids into the Jewish quarters as manifestations of western-style anti-Semitism. They were more like 'little white man' knee-jerk reflexes because the 'arrogant' Jews had stepped out of order, a reaction as spontaneous and natural as beating a recalcitrant donkey. (Une si longue presence, p.133)

Much as one would like to believe that the 'backlash' is not a recurrent feature of Arab-Jewish relations, history tells us otherwise.

But Jews are no longer prepared to play le Schmurz. It is orientalist racism to expect a certain kind of behaviour of Muslims and Arabs, and downright bizarre for Muslims to expect such behaviour of themselves.