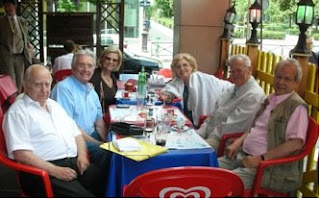 After years of neglect, Israeli Jews of Egyptian origin are finally getting the recognition they deserve. A Jewish cultural festival held last month in Paris highlighted prominent figures from Egypt who had achieved success in all walks of life.

This year's Festival des Cultures Juives in Paris, organised by the Fonds Social Juif Unifie of France, in cooperation with the ASPCJE (Association pour la Sauvegarde du Patrimoine des Juifs d'Egypte) and other organisations, was dedicated to the 60th Anniversary of Israel, under the heading Israel, Terre d'Orient et d'Occident. It featured a rich programme of lectures on Israeli life, as well as concerts and exhibitions.

Professor David Ohanna (not of Egyptian origin) from Ben-Gurion University in Israel, and Levana Zamir of the Egypt-Israel Friendship Association, were invited by the ASPCJE to take part in a Round Table discussion on June 26th at the Mairie du 3ème, a very impressive Parisian complex set in a lovely park.

Professor David Ohanna presented the "Literary contribution of the Jews from Egypt to Israeli Culture". Famous Israeli writers of Egyptian origin include Ronit Matalon, Orly Castel-Blum, and especially Jacqueline Kahanof. From the 1950s to the 1970s the latter laid the groundwork for ' the Mediterranean Option', now a 'hot theme' in Israeli policy as in other Mediterranean countries.

Levana Zamir was asked to present her research, published in Israel on 2003, about her book the Contribution of the Jews of Egypt to the State of Israel. Her research covers the period before and after the creation of Israel (Hebrew, 103 pages, prefaced by Israeli Minister of Culture, Matan Vilnayi – Keness Hafakot Publishers, Tel-Aviv).

Just as they had contributed enormously to the development of Egypt during the 19th century until the mid 20th, the Jews of Egypt, who fled to Israel as refugees after being expelled from Egypt or compelled to leave through persecution and human rights violations, also made a huge contribution to Israeli development in every field: industry, finance, high-tech, nuclear physics, space technology, medicine, sport, culture, etc.

The one field they did not wish to engage with was politics. Ms Zamir has undertaken research into the reasons why not, which we shall go into later.

First, here are a few examples of prominent Israelis all of whom are of Egyptian descent: David Harari created for the Israeli Aviation Industry the first unmanned small aircraft. Today it is exported to many countries in Europe, Asia and to the United States, bringing not only great prestige to Israel but also billions of dollars.

The late Prof. Yuval Neeman, who grew up in Egypt, was President of the Israel Space Agency. Prof. Isaac Shaveh (Shueka), an expert in nuclear physics, was a candidate for the Likud Party to the Presidency of Israel in 1981.

In finance, Victor Medina, former Director General of the Israeli Ministry of Finance, was in 2002 named the premier Bank Director in Israel. In business Egyptian-Israelis abound: Elie Papoushado (hotels), the late Leon Tamman, from an Egyptian-Sudanese family (investment); Maurice Benine (real estate) owned most of Huberman street in Tel-Aviv, near the Habima Theatre.

In film and TV Moshe Mizrahi is the only Israeli director ever to receive a Hollywood Oscar. His movies became classics. Yossef Bar-El, after many years working for Israeli TV, became Director General of the TV and Radio Broadcasting Authority in Israel. In the medical field many Israelis of Egyptian origin have founded and managed Israeli hospital departments, especially in ophthalmology, and are experts in cardiology, radiography, surgery, etc.

In sport the National Israeli Basket Ball Team Hapoel in the 1950s was composed of Olim from Egypt (former members of Maccabi Cairo and Alexandria). They brought Israeli sport international success and glory. Ditto in the diplomatic field, the Academy, the arts, etc. In industry Dr. Yehezkiel Peron, a Bnei Akiva leader in Egypt, founded the first factory in Israel for tree vaccines. Aura Hertzog (wife of the late President of Israel, Haim Hertzog), and Suzy Eban, both born and educated in Egypt, did large amounts of voluntary work. Ruth Israel received the Israel Prize for Justice, David Harari for Defence, and many others still for published research.

The reasons for their success and achievements is the importance attached by the Jews of Egypt to education, even when they were living in tents in the ma'abaroth (refugee camps) in Israel. Add to this their multicultural background, their fluency in many languages, their professional ethics, and capacity to assimilate, as well as their generosity and easy-going interaction with people. The statistics in Israel prove it: there is zero delinquency among Israelis of Egyptian origin.

Egyptian Jews have dispersed all over the word. Wherever they found themselves they did well and contributed to the country which gave them citizenship. The 35,000 Jewish refugees from Egypt who immigrated to Israel did it partly out of Zionism and partly because no other country agreed to give them citizenship, especially before 1956.

Their contribution to the state of Israel before its creation was also great. In 1914-1915, the Jews of Egypt absorbed with open arms the 11,000 Jewish refugees from Palestine expelled by the Turkish Authorities. In the early years after 1917 during the flourishing 'Golden age' of the Jews in Egypt, the Egyptian authorities openly supported the Balfour Declaration and the concept of a national Jewish Home in Palestine. In 1925 the Egyptian branch of the Friends of the Hebrew University of Jerusalem was founded. In 1935 Jews from Alexandria bought a huge plot of land to establish the Kfar Yedidia Yishuv in Eretz-Israel to absorb Jewish refugees from Germany. In 1944 the Jews of Egypt donated the huge sum of 100,000 Egyptian pounds to the United Jewish Appeal for the absorption of European refugees in Eretz-Israel.

How could one explain their non-involvement in politics ? The research yielded virtually the same answers throughout: "Nous ne voulons pas faire du coude"… "It is not honourable"… Others, who were members of Zionist movements in Egypt, were put off by the proteksia and discrimination of Fifties and Sixties Israel. But there were several mayors in Beersheva, Acre, Beith-Shean, Eilat etc.

As the Israeli Minister of Culture, Matan Vilnayi, wrote in his preface to Ms Zamir's research: "This book is finally doing justice to this Aliya. Until now, the media has been almost completely silent.

As the internationally-renowned historian Professor Shimon Shamir wrote: this research is a well-deserved tribute to this magnificent community and to their contribution to the state of Israel. I have always declared that the Jews from Egypt are an impressive model for success, due to their individual talents and achievements, independent of any political lobby. I wish other communities in Israel had followed their path."
Posted by bataween at Thursday, July 10, 2008

I shall never cease to admire the fortitude, resourcefulness and stamina of 'my' people.
Why 'my' people? Because I am part of them and they are part of me.
Others than us Jews from Egypt have let themselves die but NO we fought and got out of the rut in which our exile had put us.
Personally and in all modesty I became an author telling people about us "afin que nul n'oublie!"
Now I shall engage myself in visiting schools to tell our young people Jews, or not, what is a Jew from Egypt.
I shall start in this way:
WHAT IS A JEW FROM EGYPT?
A Jew from Egypt is a man/woman who has family and friends all over the world!
WHY: Because we had to leave (some were expulsed and some left voluntarily )to build a new life somewhere, somehow as well as we could very often without any help in another country.Sometimes, as was our case, not speaking the language!
A lot of tragedies took place. My own parents both died at age 55 and57, the uprooting was too terrible for them.But before that they fought with all their strength to live as human beings. Most of our Jews from Egypt have now reached international and national careers. They too have fought against all odds.
i would like to tell them how much I love and admire them.
Maybe this text will do so.
Sultana Vidal (also known as Sultana Latifa, author)

Good for you and the Jews of Egypt,Sultana, you have much to be proud of - strength out of adversity.
Bataween

I am proud of my Egyptian brothers & sisters..i am EGYPTIAN & they are EGYPTIAN, My religion happens to be Islam but theirs Jewish, whats the difference? Who cares? So many in Egypt talk about the Egyptian Jews & how it was foolish of Nasser & his cronies to call them a 5th column..90% of Egyptian Jews were great patriots...My granmother & father always talk about their friends who left & they miss so much!

I feel sorry for ehyptian jews, am egyptian too.. it was a bad decission to abort them from egypt!

I am from egypt ,mayfam left in 1956 i was 10ears old and new i leave in btazil with children and grandchildren, yes ist a pity to have lost our way of life,our identity, and also all the houses and goods we had, until new we like to remmber how we were going to ras elbar, with the familly, my father was a theacher in the licee du caire, but belive me the worst is to loose the conection with the familly.
Never mind. We did everything agan, we woks a lot and now we are happy again.
Daisy harari mayer from brazil rio de janeiro

Thanks for your moving comment. I think it's not so much the fact that the Jews lost their posessions and money, but their sense of community. However, as you say, you worked so hard to be happy again.