The Yemenite Jews who fled during World War ll 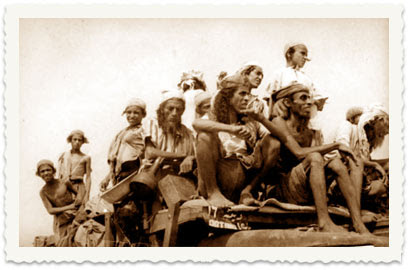 Few are familiar with the immigration story of 4,267 Yemeni Jews to the Land of Israel during World War II. Shlomo Yefet, a teacher at the Adan (Aden) community, was recruited to help and documented life in the immigration camps; he later immigrated to Israel himself. Ynet News has the story and photos:

"In 1944, Shlomo received the longed-for certificate and also arrived in Israel as an immigrant in a long journey which crossed sea and land, through Sudan, Suez, Ein Moussa, Sinai and the final destination – the "Shaar Ha'aliyah" camp near Haifa. In Israel, Shlomo volunteered in the Etzel national military organization and joined the Israel Defense Forces upon the State of Israel's establishment.

"Those were the days of World War II, when immigration permits (certificates) were not given out to Europe's Jews. Jewish Agency representatives and other Israeli officials urged Yemen's Jews to immigrate to Israel, in an effort to realize the allocation of immigration permits promised in the 1939 White Paper and bring as many Jews as possible to Israel.

"Simultaneously, these elements appealed to the Yemeni imam, who accepted the appeal due to the hunger and distress which prevailed in Yemen at the time following drought years, and allowed the Jews to leave. Thousands of Jews began crossing the border towards Adan, a colony under British rule in southern Yemen.

"The Jews were assembled and lodged in a desert camp near the village of Fayush, a camp which was built during the war to hold prisoners. Another refugee camp – Mehzabin, was located 3 kilometers (1.8 miles) away.

"Fayush and Mehzabin were run by a British crew hired by the Adan government. Later, a doctor and three nurses were sent to the camps from Israel in a bid to ease the harsh conditions.

"Shlomo Yefet was born in Adan in 1921. In 1943, while he served as a teacher in Adan's Jewish community, he was asked by the community heads to help care for the refugees who had arrived from Yemen exhausted and poor. Yefet accepted the request immediately and helped manager the camp's storeroom and hand out food to the immigrants.

"A laboratory and a clinic were built in the camp to treat immigrants suffering from malnutrition and diseases. The camp was run by Dr. David Ullman, who was assisted by a local crew and delegates from the Land of Israel: Nurses Tzipora Friedman-Makov, Rachel Mashat and Yehudit Capra."

Read article in full
Posted by bataween at Tuesday, May 13, 2008