In her review for The Sephardi Bulletin (Shab'uoth 2008) Lyn Julius finds Memories of Eden by the late Violette Shamash an entertaining and engrossing account of life in Jewish Baghdad. But Eden was short-lived, and the 1941 Farhoud sounded the death knell for the Jewish community.

The day in 1912 when Violette Shamash came into the world was not the happiest for her Iraqi-Jewish family.

Girls were considered something of a disaster and a burden. As one of six girls and only one boy, Violette’s parents had more than their fair share of burdens. Girls had only one destiny in life – to be married off with a dowry.

One generation earlier, and Violette would not even have gone to school. Not only did she learn to read and write, but she did so in French and English, as well as Arabic, at the Alliance Israelite school in Baghdad. What would her parents, who were still old-fashioned enough to have arranged her marriage (Violette was introduced to her husband on the day she got engaged to him) have thought if they knew that their daughter’s memoirs would one day be published – albeit posthumously?

Pieced together from 20 years’ worth of letters and notes sent to Violette’s daughter Mira and son-in-law Tony Rocca, Memories of Eden is a detailed record, written with a light touch and illustrated with diligently-researched, rare old photos. It gives an unusual woman’s perspective of a bygone age, lived to the rhythms of Shabbat and the Jewish festivals. Violette’s parents were among the first to move out of Baghdad’s cramped historic Jewish quarter, building a palace or qasr in Karrada, then on the outskirts of Baghdad, that King Faisal himself would covet.

According to legend, the Garden of Eden was located here, in the Land of the Two Rivers. At first glance there seems nothing Eden-like about a hot and dusty existence amid blocks of ice and septic tanks and horse-drawn carriages. Yet Violette played amongst the fruit trees. Life was pastoral and idyllic on the banks of the Tigris and the minutiae of domestic living was alleviated by a staff of servants.

The book has an Arabian Nights quality – peppered with tales from b-iyyam el Osmali, the days of the Ottomans. In the knowledge that Judeo-Arabic will soon be a dying language, a lexicon at the back compiled with the help of Hebrew University Professor Shmuel Moreh is thoughtfully provided. Anyone who grew up hearing words like daghboona, (corridor), insults like booma (owl) and wabba (plague)and the typically Jewish expression of wonder or shock weh hoo weh, will finally understand what they mean and be propelled on a Proustian journey back to childhood. But even if you had not the faintest idea about Jewish life in Baghdad, you would find it an entertaining and engrossing read.

Tantalising is the description of the run-up to the 1941 Farhud pogrom which sounded the death-knell for 2,600 years of Jewish presence in Iraq. Violette, who was about to give birth to Mira, sheltered with family while Jews were increasingly the object of attack during the ‘black month’ that the pro-Nazi Rashid Ali held power. Violette’s family was among the first to see the writing on the wall, six months later moving to India, then Palestine, Cyprus and finally London. The Jews of Iraq were ‘scattered like feathers from a pillow’ to the four corners of the globe. Today the community is virtually extinct.

Towards the end of the book there is a change of tone as Tony Rocca, a career Fleet St journalist and editor, takes up the neglected story, based on original research, of the one man who could have halted the Farhud slaughter of the Jews. Dubbed ‘Cornwallis of Arabia’, the British ambassador Sir Kinahan Cornwallis, as tall at six- foot-four as his role in the politics of Iraq has been inexplicably underrated, dominated Iraq for 40 years. While the mob went on a two-day murder and looting rampage, Corwallis refused to order British troops, camped out on the outskirts, into Baghdad, lest the British be seen by the Arabs as an army of occupation. And so the lives of up to 600 Jews were callously sacrificed to realpolitik. 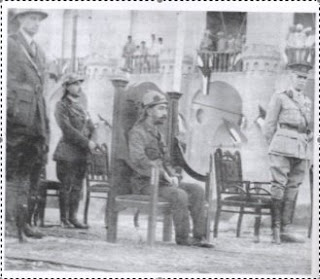 I don't doubt that these words are still used in Arabic; but they were commonly used by Jews in Iraq.