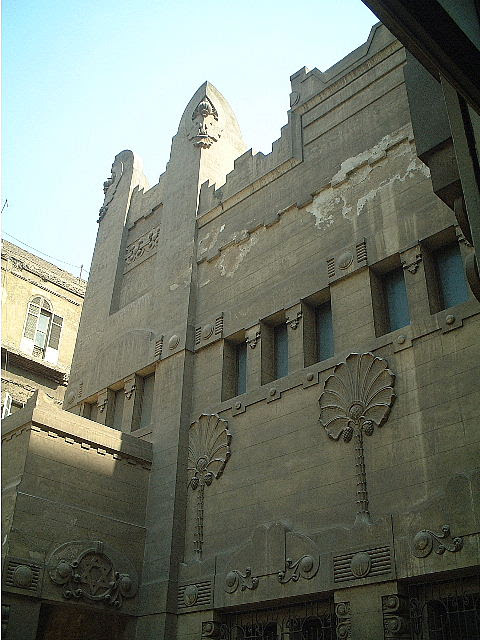 The handsome Art Nouveau Sha'ar Hashamayim synagogue on Adly St in Cairo has just celebrated its centenary. But the once-glorious Jewish community is down to 40 - mostly elderly women - and the future is 'frightening'. Yoav Stern of Haaretz reports:

"Two historical moments were recorded Tuesday at the Sha'ar Hashamayim synagogue in Cairo. The first was when Dr. Gaber Baltagi, an academic who writes poetry as a hobby, recited one of his works in Arabic and Hebrew, calling for peace among the nations. The second was when a loud shofar (ram's horn) blast, usually sounded at the closing of the Ne'ila service on Yom Kippur, echoed in the cavernous space of Cairo's great synagogue, bringing tears to the eyes of many of those present.

"Members of Cairo's Jewish community - those who have remained here, as well as others who have moved away - plus many guests from Egypt and around the world, were there for a ceremony marking 100 years since the founding of the synagogue.

"The building was recently renovated, with the approval and assistance of the Egyptian authorities. It was rededicated Tuesday.

"Jews lived here throughout the ages," said community president Carmen Weinstein. "I see no reason for Jews not to continue living here."

Read article in full
Posted by bataween at Thursday, November 01, 2007

WHAT FUTURE? ARE YOU GUYS SERIOUS ? YOU SAY THERE ARE ONLY 40 JEWS, MOSTLY OLD WOMEN AND IN THE SAME SENTENCE YOU SAY " THE FUTURE IS FRIGHTENING" UNLESS THOSE 40 OLD WOMEN GIVE BIRTH TO MILLIONS OF JEWISH BABIES IN A VERY SHORT TIME AND QUICK, THERE IS NO CHANCE IN HELL THAT THERE WILL BE A JEWISH COMMUNITY EXISTING. IN A COUNTRY OF 60 + MIILION THERE EXISTS 40 JEWS. AND YOU CALL THAT A COMMUNITY, WOW.