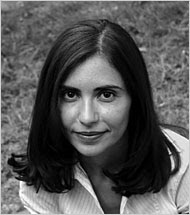 Aged 10, Dalia Sofer escaped Iran with her family for the USA in 1983. Septembers of Shiraz is her first novel. Claire Messud, reviewing the book for The New York Times, thinks it might even become a classic (With thanks: Albert):

"Told in the third person, largely in the present tense, the intersecting narratives follow each member of the Amin family over the course of their most difficult year, from September 1981 to September 1982. Isaac, the paterfamilias, is approaching 60. A successful jeweler and gem merchant, he has — to his grave discredit and danger — been patronized by many in the aristocracy, including the wife of the shah. In the opening chapters, he is arrested by two armed Revolutionary Guards, taken from his office at lunchtime on a routine workday: “He looks down at his desk, at the indifferent items witnessing this event — the scattered files, a metal paperweight, a box of Dunhill cigarettes, a crystal ashtray and a cup of tea, freshly brewed, two mint leaves floating inside.”

"From this beginning, Sofer deftly interweaves Isaac’s experiences with those of the other members of his immediate family: his wife, Farnaz; his 9-year-old daughter, Shirin; and his 18-year-old son, Parviz, who has been sent to New York to study architecture.

"The book’s simple plot is immediately engaging: What will become of Isaac Amin? Will he survive the brutally byzantine, surreal game that his incarceration becomes? Will he die by accident or from illness or torture? What allows one prisoner to survive while his cellmate faces the firing squad? Meanwhile, outside the prison, Farnaz searches for her husband and struggles to maintain their household: Will she find word of him? Will she and her daughter escape the scrutiny of the Revolutionary Guards? How can her life continue — and yet how can it not?"

Listen to Nextbook interview
Posted by bataween at Sunday, August 05, 2007