BBC agrees to amend article on Jews of Iraq 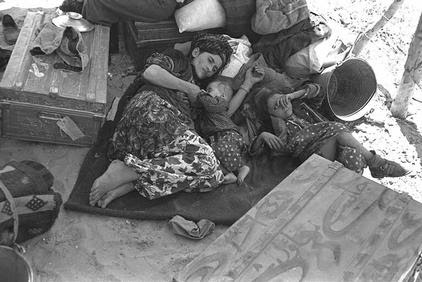 Good news from the media watchdog CAMERA: following its appeal to the BBC's Editorial Complaints Unit, the BBC made 'a significant revision to a once wildly skewed article' about Jewish refugees from Iraq. CAMERA issued the following media alert: (with thanks: Jerusalem Posts)
"The original article painted a picture of "an easy, happy life" for Jews in Iraq while glossing over the actual record of persecution faced by Iraqi Jews. Most egregiously, the piece ignored the Farhoud, a brutal anti-Jewish massacre that occurred in 1941.

After our correspondence, an editor told CAMERA: "On further consideration, we have made some changes to the report."

Most importantly, the BBC added information on the 1941 massacre:

"But, while anti-Jewish sentiment flared up after the creation of Israel and the subsequent Arab-Israeli war in 1948-49, discrimination and attacks on Jews were part of life in Iraq. In the most notorious incident, mobs rampaged through the Jewish district of Baghdad killing an estimated 170 Jews in 1941, in what became known as the Farhoud massacre."

BBC also added the word "fled" to describe the departure of Jews from Iraq, which is significant because the article initially said only that the Jews "left" Iraq - a euphemism that hardly describes the duress, pressure and even expulsions that caused the exile.

The BBC also suggested that it would soon publish a feature article which would provide readers with another (and hopefully more accurate) look at the plight of Jews forced from their homes in Arab countries.

"It is worth noting that the Middle East desk of the BBC News Web site was initially reluctant to make any changes to the article. It was only after CAMERA took its complaint to the next level - the Editorial Complaints Unit - that the changes were made. This serves as another reminder that perseverance pays in the quest for a fair and accurate media. "

Read report in full, which also analyses BBC bias in the coverage of Palestinian refugees

It is right and proper for people to complain about the bias and animus of the BBC against Jews and Israel. It would be good also if Jews themselves were to produce and distribute more TV programming about our history. Both Israel and Diaspora Jews have been delinquent in this regard.

Easier said than done, anonymous. I tried to get the BBC and Channel 4 to show Pierre Rehov's 'Silent Exodus'. Nothing doing. The BBC and other media put up a 'wall of resistance' to anything that does not fit in with their worldview. But the pressure is building up slowly, with more and more Mizrahi Jews writing their memoirs, etc.