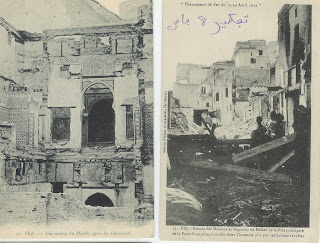 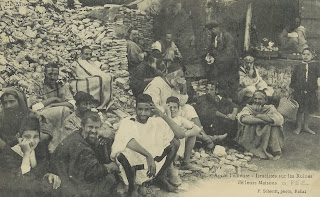 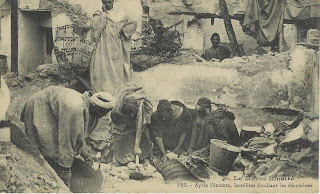 Next time somebody tells you that the Jews lived perfectly happily in Arab countries, think of the above images. Shocking, aren't they? Perhaps you think they must have happened after 1948, as an understandable backlash to the creation of Israel?

No, these horrific pictures of devastation date back to 1912. They took place in Fez, in 'moderate' Morocco, which proudly proclaims that it has always treated its Jews well. They show the destroyed house of a prosperous Jew, a vandalised shop and homeless Jews squatting in the ruins of their houses after the mob had run riot in the Mellah (Jewish quarter). Four years earlier, similar devastation took place in Casablanca*. For this you could not blame Israel, nor the colonial powers. Morocco was not yet a French protectorate.

The Jews were not expelled from Morocco, but is any no wonder that with anti-Jewish pogroms such as these deeply ingrained in their memories, Jews fled the country as soon as they could?

With acknowledgements to Joel Bettan

*5 - 6,000 men broke into the Mellah on 3rd August 1907. They looted, raped and murdered for three days. Only five or six houses were spared. More than 500 Jewish-owned shops were set on fire. All the synagogues were wrecked, but the Jews managed to save the Torah scrolls. There were 6,000 Jews in Casablanca. After these tragic events, one third had disappeared - some had been kidnapped, some had fled. (source: Histoire des juifs en Afrique du Nord by Andre Chouraqui, p45). I repeat, Morocco was not yet a French protectorate when these events took place.

Another article describing the Israeli attempt to get Jewish Iranians to make aliyah to Israel through financial incentives:

I guess this is the Iranian response to Israel's efforts to get Iranian Jews to move to Israel:

Vanity Fair has an article by Christopher Hitchens that whitewashes Tunisia and makes no mention of the maltreatment inflicted on its Jews by the regime.

There's a campaign afoot to distort and invert the truth about the oppression that Jews endured in Moslem countries.

As usual, Israeli and Western Jewish leaders have nothing to say on the matter.

What is so horrific about the pictures? It is tragic, and that is it. More over, you offer no context, whatsoever.

All of the photos are dated after the French colonized Morocco. Officially, Morocco accepted French rule in March 1912 but they already conquered the country and divided it among themselves and the Spanish.

The captions clearly indicate it was during French colonization.

The French created tensions about the Jews and Muslims of Morocco and of course later on tried to deport all Jews to death camps under vichy.

At least learn some French before posting some material in the French language.

In response to "Moroccan": one of the photos dates the riots [= pogroms] to 17-19 April 1912 [I could only read a date on one photo]. Indeed, the Statesman's Yearbook dates the treaty of protectorate between France and the Sultan to 30 March 1912, two and a half weeks before the pogrom in Rabat. So what? The caption says that rebel soldiers conducted the pogrom [les emeutes]. Was the pogrom because of something genuinely wrong that the Jews had done --or was it the Moroccan soldiers' way of letting off steam and frustration over the accord with France?? Likewise, the Arab mob in Baghdad made a pogrom against the Jews there at Shavu`ot 1941 after British and allied forces [inc. Assyrians and Jews from Israel] had defeated the Iraqi Arab army. This pogrom seems to have had nothing to do with anything the local Jews had done. Rather, the mob may have been letting off steam or frustration over their army's defeat at British hands. In any event, the British Foreign Office told the British army NOT to intervene to stop the pogrom/massacre. For two or three days, the British army waited outside Baghdad not attempting to save any Jewish lives. This was apparently at the Foreign Office's orders.

Moreover, the Alliance Israelite Universelle in Paris was getting reports from Morocco throughout the second half of the 19th century about pogroms and other abuses carried out against the Jews there. Also look up the book of Charles Foucauld, a French traveler in Morocco in the 19th century, who reported horrendous treatment of Jews, including a form of slavery.

anonymous mentions Christopher Hitchens. I wouldn't trust Hitchens farther than I can throw him. He's a big fake like many or most British journalists.