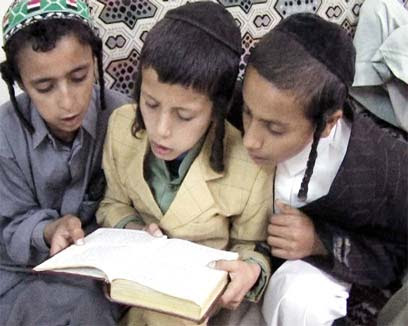 Ynet News carries this comprehensive report about the situation of Jews in Yemen:


"One rebel leader, Abdel Malak Al Huthi, confirmed in February that threats had been made against Jews in Salem village to make them leave.

"These Jews have a problem with the other inhabitants of the region, who have complained about them," he told the Arabic-language satellite channel Al Jazeera. "The people have demanded that these Jews leave because they have provoked damage ... by their admitted meddling in regional affairs and their moral corruption," he charged.

The three-year-old rebellion led by the Huthi family has left hundreds dead. Intense fighting resumed in January and has been raging in Saada province near the Saudi border ever since.

Elsewhere in Yemen, the remainder of the 300-strong Jewish minority - the last remnants of a once much bigger community - continue to live safely.

Some insisted that they had no intention of emigrating.

"We have refused to leave Yemen, because we feel that the situation here is better. As Yemenis, we have our conservative customs and traditions," 43-year-old Saeed Al Naati said. "We feel that we are equal to Muslim citizens in rights and duties," said Naati, who lives in Kharef on the outskirts of Raydah, some 70 kilometers (40 miles) north of Sanaa.

He is one of the few, however. In 1948, Yemen's Jewish community numbered some 60,000 but with the establishment of the Jewish state that year, more than 48,000 emigrated to Israel in the following three years.

The community continued to dwindle in the following decades and by the early 1990s it numbered only around 1,000 people.

The lifting of a longstanding travel ban in 1993 sparked a fresh exodus.

It is now mainly the elderly who cling on. With international Jewish organizations offering to pay for their higher education abroad, many of the new generation prefers to leave.

The United States and Britain rather than Israel now top the list of preferred destinations.

Yemeni Jews currently have two synagogues, down from a reported 39 in the capital alone in 1930.

They also have two private schools in Raydah and Kharef, which are funded by American Jewish societies. Jewish pupils go only to these two schools where they study Hebrew, Arabic, and English and learn the tenets of their religion.

But unlike the rest of the population of Yemen, Jews refrain from carrying weapons, in a country where almost every civilian male is armed. They do not even carry the traditional jambiya or dagger - an essential accessory for Muslim men in Yemen.

This Jewish tradition is based on their status as people of the book whose protection was considered the duty of the Muslim society in which they live.

Read article in full
Posted by bataween at Wednesday, May 02, 2007