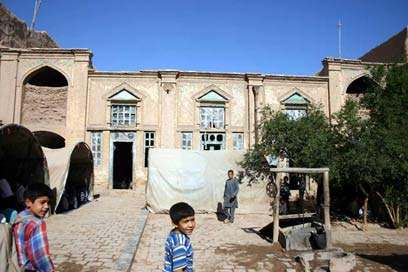 This was once a synagogue (photo: Tzur Sheizaf)

Tzur Sheizaf's interview for Ynet News with the last Jew of Afghanistan, Zevulun Simantov, came at a price: $100.

“Shalom aleichem,” I said. Hebrew in Afghanistan. “Shalom alaichem,” he said in the accent of Jews who speak Dari or Tajik (the Persian of Central Asia). Zevulun Simantov is his name. He wore a white undershirt and looked to be a little over 60. He looked at me with suspicion; perhaps he was calculating what he would get out of me. He didn’t look Afghani, the last Jew in Afghanistan. I climbed the dark, broken stairs after him to the single room where he lives, in what was once the building of the Jewish school.

Yitzhak Levy lived with him until a few years ago. The quarrels between the two were covered in the world press in 2003 after the United States conquered Afghanistan. The two fought to be the last Jew in the country. Simantov won when Yitzhak Levy died and he was left alone. When Levy was alive the two quarreled, in front of the Americans, over which of them was a Taliban agent and which was their good friend.

Simantov is the custodian of Jewish property in Kabul. In Afghanistan. (...)

When did Jews arrive in Afghanistan? Legend has it that they came with the Babylonian exile in the time of the Persians. It is said that perhaps there were Jewish soldiers in Alexander the Great’s army. The evidence—monuments on the route from Balh to Termez in Uzbekistan—confirms 900 years of Jewish presence.

A hundred years ago there were 10,000 Jews in Herat, Balh, and Kabul. At the beginning of the 20th century they began to emigrate to the Land of Israel. Officially the Jews were permitted to leave between 1950 and 1971. The last Jews left Afghanistan in the 1970s after the communists overthrew the last Khan and took control. When the Russians invaded in 1979 only a few Jews remained, and they left for Uzbekistan, Turkmenistan, and India. "
From a community of hundreds of families in Herat, to which the Jews of Meshad in Persia were exiled when they were forcibly converted to Islam in 1840, not a living soul remained. I was in Herat. In good times there were three synagogues and a bathhouse there. The synagogues have become mosques. The Mula Shmuel Synagogue has become the Islamic school where children skip on the cantor’s bimah located at the center of the dusty room. “Don’t forget to speak with the Jews in England and America!” Simantov reminds me as he accompanies me out to Flower Street and my two Afghani escorts look at him with admiration. In less than an hour he’s earned a sum equal to a monthly salary.
There are all kinds of ends to Jewish life in the world, to how the last Jew looks. I met one of them in Calcutta, several in Yemen, in Morocco. But Simantov, unlike the others, was aware of the importance of this time and of his uniqueness (which will pass like everything else), and got as much out of it as he could.