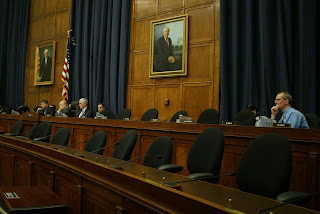 A US Congressional subcommittee heard 'the other side of the refugee coin' yesterday: the plight of the Jewish refugees from Arab countries. Justice for Jews from Arab Countries has issued this press release:

(WASHINGTON, D.C.) May 8, 2007 - Jews in Arab countries "were compelled to leave their homes because of circumstances that included terror and government edicts;" so stated Congressman Gary Ackerman (D-NY) who, as Chair of the House Subcommittee on the Middle East and South Asia, stressed that: "Jewish refugees from Arab lands are of great concern to the Committee.

"These statements were made during a Congressional Hearing that took place on May 8, 2007 on Capitol Hill. Rep. Ackerman told how Jews lost their "entire businesses, not just their personal assets, but the property of entire communities; and most painful of all, not only did they lose their personal dignity and security, but their entire national identity."

Testifying as expert witnesses were Dr. Howard Sachar, Professor Emeritus of History and International Affairs at George Washington University, and Dr. Shibley Telhami, Anwar Sadat Professor for Peace and Development at the University of Maryland.

The ranking Republican on the Subcommittee, Rep. Mike Pense remarked how Jews from Arab countries "have suffered pogroms, exiles, confiscation of property - all for the alleged crime of Zionism." In addition, Rep. Pense called attention to the ill treatment of Palestinian Christians by Palestinian Arabs. He noted that the percentage of Christians in the Palestinian Territories has dropped from 10% to 8% in the last two decades, a situation he called "outrageous and tragic."

Additional initiatives on behalf of the rights of Jewish refugees from Arab countries will be undertaken on Capital Hill over the next few months. On May 15-16, 2007, a delegation comprising officials of major Jewish organizations will be making representations in support of Senate Resolution 85 and House Resolution 185 - both on the rights of Middle East refugees. Over the course of two days, meetings will be held with senior officials of some 20 Senators and Congressmen, seeking additional co-sponsors for these Resolutions that call for US recognition and support for the rights of Jewish refugees from Arab countries.

On June 19, 2007, the Congressional Human Rights Caucus will convene a special Hearing on the mass violations of human rights of Jews under Islamic regimes and their subsequent flight from their longtime residences in Arab countries throughout North Africa, the Middle East and the Gulf Region. Under the auspices of its Chairman, Congressman Tom Lantos, the Congressional Human Rights Caucus will hear from legal experts on the rights of Jewish refugees from Arab countries as well as from 'living witnesses' - Jews who will testify as to their plight in, and flight from, the Arab countries in which they were born.