The battle to control Ezekiel's synagogue 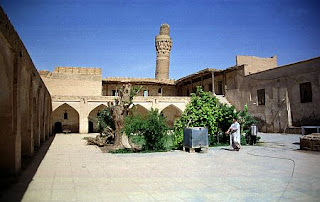 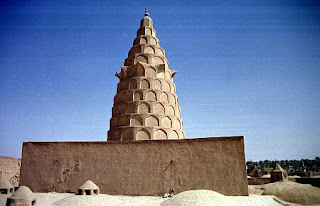 The Hebrew inscription on the wall of Ezekiel's burial chamber reads: "This monument is the burial monument of our master Ezekiel, the prophet son of Buzi, the priest, may his virtue defend us and all Israel Amen "

(With thanks for source material: Eli)

Hardly a Jewish shrine or holy place exists that is not also considered sacred to Muslims. The cave of Machpela in Hebron and Temple Mount in Jerusalem are perhaps the obvious examples.

Iraq - the Biblical Mesopotamia -is almost as rich in Jewish history as the Land of Israel. Here Abraham first discovered the one God, and the prophets Ezra, Nehemiah, Nahum, Jonah and Daniel walked the dusty land of the two rivers.

The shrine most closely associated with the Jews of Iraq was the tomb of Ezekiel at Kifl, some two hours' drive south of Baghdad. It was popular with Muslims too, being on the route of the Hajj to Mecca. It is thought to have become a centre for Jewish pilgrimage after the Muslim conquest and the cult of the Shi'ite saints in Islam took hold. Benjamin of Tudela visited the site in 1170, and described seeing a synagogue, a Teba and a room filled with books dating back to the First and Second temples. Until their mass flight in 1951 the local Jews, and some from as far afield as Persia and India, converged on the tomb - especially between New Year and the Day of Atonement when the book of Ezekiel was read.

But what on the face of it constitutes a 'shared Jewish-Muslim heritage', conceals, throughout the shrine's history, a bitter struggle for control.

According to Zvi Yehuda* of the Hebrew University, the synagogue at Ezekiel's tomb became significant as a symbol of national identification under the Abbasids, when the Jews of the lands of Islam united under the leadership of the Jews of Babylonia. The growing importance of the site aroused the envy of the Muslims. Some Muslim writers attributed the burial place of the prophet Ezekiel to their 'mysterious and controversial' Koranic prophet Dhu-al-Kifl. Under the 14th century Mongol sultan Oljeitu the Muslims took over the synagogue of the prophet Ezekiel and turned it into a Muslim prayer house. Oljeitu also began to build a mosque, now ruined by flooding, but its minaret exists to this day.

For five centuries, not much was heard about the synagogue at Ezekiel's tomb, but it is assumed that control of it and the access yards to the tomb itself were in Muslim hands.

Around 1778, when the mosque was destroyed by floodwater, the local Muslims tried to turn the outer yard into a mosque, complete with minbar, mehrab, mahfal and Koranic inscription. They appointed Khadims as caretakers. Until the 1820s the Jews were banned from passing through the yard - now converted to a mosque - to the tomb.

In the 1840s, according to Zvi Yehuda, the Jews managed to regain control of the synagogue next to Ezekiel's tomb. At the time, the Turkish authorities needed the Jews to pay for repairs to the 'outer yard'. In spite of protests by the Shi'ite Muslims who controlled the tomb precincts, the Jews seized the opportunity to remove the Muslim symbols and ritual items from the outer yard and turn it into a synagogue again. The Turks (plied with generous Jewish gifts) expelled the Shi'ite caretakers and allowed the Jews to erect new buildings. To reinforce their hold on the site, the Jews set up a yeshiva staffed by scholars from Baghdad and their families. Jewish traders and craftsmen from Hilla, Baghdad and elsewhere went to settle in Kifl.

In the 1850s, the Turks expelled the last of the Shi'ite caretakers. The Jewish official now in charge was elevated to the same status as the keepers of the Shi'ite shrines. Jewish control was complete. The Muslims made two more attempts to wrest control of Ezekiel's yards - in 1860 and in the 1930s when they took over the synagogue for prayers. After a few months the occupation of the synagogue ended. Until their departure for Israel in 1951, the Jews of Kifl continued to maintain the yards of the prophet Ezekiel's tomb.

*The Synagogue at the Tomb of the Prophet Ezekiel at Kifil