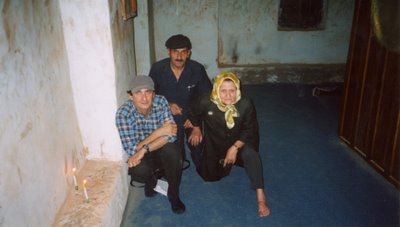 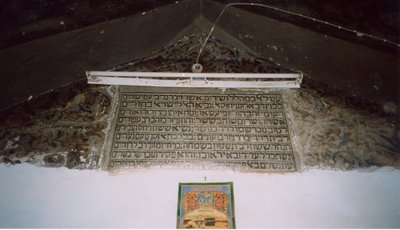 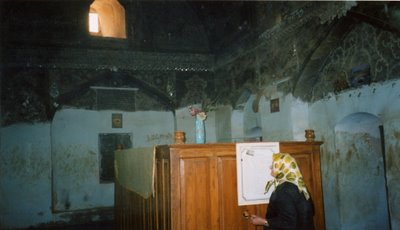 With Passover beginning tomorrow evening it seems fitting to post Tim Judah's moving article, Passover in Baghdad. Tim, a war correspondent whose Indian-born father was of Iraqi-Jewish origin, went to Baghdad to cover the US invasion in April 2003. He managed to track down most of the 34 Jews still living there. Today, their numbers are down to single figures and the 2,700-year-old Jewish community in Iraq is on the verge of extinction.

"Sara told me that in Al Kifl her family had lived next to the shrine of Ezekiel the Prophet. Every year thousands of Jews would come to make a pilgrimage there. A couple of days before I talked to Sara I had visited the nearby town of Karbala. Here I had seen tens of thousands of Shiite Muslims beating their breasts and heads and converging on the golden domed mosques of the city to mourn the Imam Hussein who had died there in AD 680. At the height of the pilgrimage there may have been up to a million pilgrims in Kerbala at any one time.

"I asked Sara when the Jews would make their pilgrimage and she said that it used to take place in the week after Passover. In fact, she said—scrabbling through a Jewish calendar—it would have to be done by, well, tomorrow.

We began to debate. Would the road be safe? What about the Shiites? A day or two before, one of the Shia leaders had been arrested by the Americans, and his followers had been protesting, writing slogans in blood on the road outside the Palestine Hotel. But we decided to try and go anyway.

"We set off the next morning. The road was open and there were no checkpoints. American military convoys jostled for space with the rest of the traffic. When we got to Al Kifl we made our way to the shrine, behind the old, covered market. Because it was Friday, the Muslim day of prayer, the shops were shut and just as we got there a Shiite imam was leading his flock into the tomb to pray. He politely told Sara to put on a headscarf. We went to have lunch while the prayers took place. Ishak was nervous and did not feel safe. Men ambled around with Kalashnikovs. There had been fighting with the Americans here and the main street was pockmarked with bullet holes. Outside the little restaurant were three mini vans with coffins strapped to their roofs. They were Shi'a being taken for burial at their nearby holy city of Najaf.

"When we went back, prayers had not yet finished. We sat outside a teahouse in the covered market while inside a group of men watched a DVD chronicling the crimes of Saddam. Sara told me that until 1951 about five thousand Jews used to come to Al Kifl during Passover week. And people still came after 1951, at least until 1967, after which it grew too dangerous. Then in 1984 a group of twenty Jews had come from Baghdad and in 1989 Sara, her family and another family had come, but no Jews to her knowledge had made the pilgrimage since then.

"We wandered back to the gate of the shrine and met a young man who was waiting there for his father. He told us, without being asked, that the market used to belong to Jews and added that now Indians and Iranians came to pray at the shrine. I asked if Jews came too and he said, 'I don't know, because I don't know what they look like.'

"Before the Jews left Al Kifl the Jews and the Shiites had shared the shrine. They would come at different times of day and steer clear of it on one another's holy days.

"Inside the shrine was the tomb of the Prophet Ezekiel. There were still Hebrew inscriptions on the walls. The tomb was surrounded by a large wooden covering, like a sarcophagus. We lit candles and the guardian, who realized from the way we talked and acted that we were Jewish, opened a tiny door at the bottom of the covering. By crouching down we could see the actual, concrete-covered tomb. It had Hebrew script on one end. The guardian told us he would welcome the Jews to come back to pray here. Sara walked around and kissed the corners of the tomb.

"Later Sara told me she was both exhilarated and saddened by what we had done. The past, she said, her childhood in Al Kifl, had seemed 'like yesterday'. But now perhaps this would be her last visit.

"On the way back to Baghdad we stopped at the ruins of Babylon. Much of the ancient city was reconstructed under Saddam, the rest is crumbling walls in dips and mounds and the whole site is dominated by one of his nearby palaces. A few American soldiers were mooching about, some guarding the site, some tourists.

"This was where this story began, and this was where it was ending. In 606 BC the Babylonians brought the first group of Jews from Judah into exile here. In 597 BC King Nebuchadnezzar brought several thousand more, including Ezekiel. Ezekiel told his people that, following the destruction of Jerusalem, the exiles were the hope of Israel's redemption. When the time was right, God would lead them back to the Promised Land.

"I left Iraq on May 1. The planned airlift still hadn't happened and the people who were supposed to be organizing it—exactly who they were was still unclear—had started to argue that airlifting a handful of people was not only unnecessary but might even be 'bad for the Jews'. Bad for those who would be left behind, and bad politics in a region—and world, even—that already believes that one of the main reasons for the war was to help Israel. Those that wanted to go would be helped to do so individually.

"As Sara and Ishak and I drove back to Baghdad I tried to imagine my ancestors here. At home my father had always told me that we came to Iraq with the exiles of 597 BC. (How did he know this, I had always wondered.) I tried to picture my forebears, in the fields or perhaps in the shops or the market, but I couldn't. A cold grey dust filled the air. Wrecked cars and burnt-out tanks littered the road back to Baghdad. On either side were dried-out, churned-up fields and the remains of unfinished concrete buildings. So my ancestors lived here for 2,500 years? So what? My pilgrimage was over. I will never need to do it again."

Tim Judah's photographs show him (in the checked shirt), 'Sara' and 'Ishak' at the prophet Ezekiel's tomb, and one of the Hebrew wall inscriptions. 'Sara' now lives in London.
Posted by bataween at Tuesday, April 11, 2006