Spare a thought for Jews in Iran

With the election of an hardline conservative as the new Iranian president, spare a thought for the precarious plight of Iran 's 30,000 Jews, who have been living as dhimmis under sharia law since the 1979 Iranian revolution. As the article below shows, the community lives in a constant state of anxiety.

A 'golden' period for the Jews under the Shah, when Iran and Israel enjoyed excellent relations, ended in that year: 17 Jews were executed, including the head of the community. Some 50,000 Jews fled. Many had their property confiscated. As the regime became hostile to Israel, Jews were always vulnerable to arrest or worse as 'Zionist spies'. (In 2003 the last of 13 Jews arrested on trumped-up charges were released after international pressure). Today Jews are nominally allowed to leave but cannot send money out and restrictions still apply. Background articles here and here.

TEHRAN - "What do you want?" asked a suspicious and angry elderly local, as I entered the Mahariv synagogue in Tehran on Friday night.

When I explained to him that I was Jewish, and asked to join the prayer service, he was incredulous. "We haven't seen Jews from outside of Iran for 30 years," he said.

On my first day in Tehran, I asked my cab driver to take me to the local synagogue. I didn't have an exact address, only the name of the neighborhood. 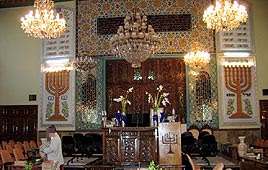 After circling the area for a while, we arrived at a two-storey building on Street 15 in Tehran. Blue Hebrew letters decorated the front end of the building. The gate was locked, and our attempts to reach someone through the intercom went unanswered.

The driver sensed my disappointment.

"If you would like to see the Jewish cemetery, I can take you there," he said. "It will be interesting for you. The grandmother of the president of Israel is buried there."

I asked him who the president of Israel was.

"Moshe Dayan," said the cab driver. I didn't rush to correct him. It seemed to me that in the heart of Tehran, on a road that connected the synagogue to the Jewish cemetery, accompanied by an unknown driver, it was preferable not to reveal familiarity with Israeli affairs.

We were soon on our way. 50 kilometers north of Tehran, on the road to the Caspian Sea, perched on red hilltops, spectacular in their beauty, is a small village by the name of Damavner. The dirt road leading to the grave stones was blocked with enormous concrete blocs.

The young driver suggested that we leave the car on the main road and climb up on foot. Children playing soccer in the neighborhood pointed us towards a winding road, littered with rocks and wild thorns. The cemetery had no fence, and lacked a gate, or guards. I walked through the graves and searched for a stone with the name Katsav. Article in full