In another ground-breaking development , Sudan has joined the UAE, Bahrain and Morocco in signing the Abraham Accords with Israel. The US will removed Sudan from the terrorist list, thus opening the way to Sudan receiving loans and access to know-how. The Voice of America reports: 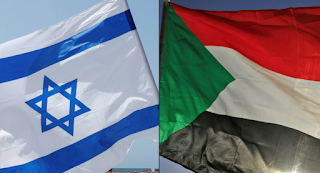 KHARTOUM - Sudan has officially signed the Abraham Accords, agreeing to normalize relations with Israel.
The deal paves the way for Sudan to relieve its massive debt to the World Bank.The historic signing took place at the U.S embassy in Khartoum Wednesday. U.S. Treasury Secretary Steven Mnuchin signed on behalf of Washington, while Sudanese Minister of Justice Nasereldin Abdelbari signed on behalf of Khartoum.
Speaking to reporters after the signing, Abdelbari said Khartoum welcomes the rapprochement and the diplomatic ties between Sudan and Israel that Sudan will boost for its own benefit and for other countries in the region.
He said Khartoum appreciates Mnuchin’s historical visit and hopes to strengthen ties between Sudan and the U.S.
In his brief statement, Mnuchin said it was "a great honor to be here with you today, and I think this will have a tremendous impact on the people of Israel and the people of Sudan as they continue to work together on cultural and economic opportunities.”
Read article in full
Posted by bataween at Saturday, January 09, 2021