It is well documented (thanks to meticulous Nazi records)  that some 2,000 Mizrahi Jews living in Europe during WW2 (mostly, but not exclusively North African) were deported to Nazi concentration camps. Among the best known were Young Perez, flyweight boxing champion, who perished on the Death March, and Alfred Nacache, swimming champion, who survived Auschwitz. Now an Israeli archeologist of North African extraction has unearthed dog tags belonging to North African Jews who were murdered at Sobibor camp. Report in Haaretz (with thanks: Lily): 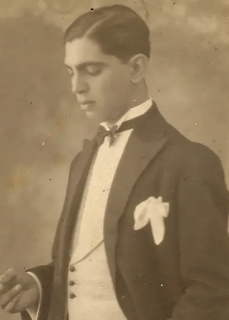 Maurice Ben Zaken, a relative of the archeologist Yoram Haimi, died in Sobibor champ
Messasud Aknine, from Marseilles, France, was arrested in 1943 and deported to the Drancy internment camp outside Paris.
The 73-year-old Jew’s fate was sealed. Before long he was sent to the Sobibor death camp in occupied Poland, where the Nazi German invaders killed him in the gas chambers.
In all likelihood, no one would have heard about him again were it not for a recent find, deep underground, of a chilling memento.
For several years now, Yoram Haimi of the Israel Antiquities Authority has been excavating at the Sobibor site with Polish colleague Wojtek Mazurek.
Among the tens of thousands of items belonging to the camp’s prisoners that they have pulled from the earth, they recently found five ID tags. The Germans used the numbers etched on these dog tags to identify the prisoners, similar to the numbers tattooed on the arms of Jews at Auschwitz.
Through archival research, Haimi was able to identify several of the names behind the numbers, shedding light on a little-known chapter of the camp’s history: Hundreds of the Jews killed at Sobibor, about 160 miles east of Warsaw, came from North Africa. Aknine, born in Tangier, Morocco in 1870, was one of them.
Another victim, David Aknine, was born in 1900 in Tlemcen, Algeria. He too was killed at Sobibor in 1943. Such was also the fate of Shalom Levy from Boufarik, Algeria, whose ID tag was also unearthed by Haimi.
Read article in full
JewishGen Holocaust database (with thanks: Edna)
Posted by bataween at Sunday, January 10, 2021

Email ThisBlogThis!Share to TwitterShare to FacebookShare to Pinterest
Labels: Holocaust in Arab and Muslim lands, Jews of North Africa