The UK's official commemoration of 'Jewish Refugee Day', arranged by the Board of Deputies, the Israel Embassy and Harif, was introduced by Tzipi Hotovely, Israel's new ambassador. Sandy Rashty reports in Jewish News:
Israel’s Ambassador to the UK challenged the “lies” spread by the Nakba Day movement and called for more recognition of the plight of Arab Jewish refugees.peaking at an event to mark the persecution of Jews from Arab countries and Iran on Tuesday evening, 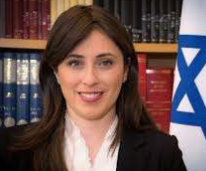 Ambassador Tzipi Hotovely (pictured) said: “Here in this country, the perception about Israel is: ‘Some European colonialists came to the Middle East and found shelter for the Jewish people’
She added: “It’s important to remember Jews were always part of the Middle East and we are natives like our Arab neighbours. We are not colonialists who came from Europe.
She also condemned the ‘Nakba Day’ movement – a so-called ‘disaster’ day designated by Palestinians after the state of Israel was founded in 1948.
Read article in full
Posted by bataween at Thursday, December 03, 2020