In Bahrain I was a privileged but silent Jew

Gayle Meyers was posted by the Pentagon to Bahrain. She felt safe and privileged. If she had revealed her Jewishness, she now reflects that it would have caused nothing more than a moment of uncomfortable silence.  She never thought she might return to the Gulf, but with the signing of the Abraham Accords, who knows? Report in JTA News: 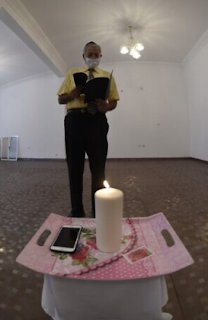 Bahrain Jewish community leader Ebnrahim Nonoo marks Kristallnacht for the first time at Bahrain's synagogue
I’m not sure what I thought would happen if I talked about being Jewish. Although it’s a major part of my identity and obvious to anyone who gets to know me, I already kept a low profile about my Judaism at the Pentagon.
I was certainly not the only Jew in the building, but the culture of the place was overwhelmingly Christian, from earnest invocations of God and country to office doors that were lovingly decorated with wreaths and Santas at Christmastime. When I was working on Middle East policy, I feared it would paint me as biased, or at least as caring too much about the region.
In Bahrain, the fear was different. In my wildest nightmares I imagined being called out loudly as a Jew and all heads turning in my direction. My fear of being seen as an outsider was magnified by the nature of the country itself, which is marked by social inequality, sectarian discrimination and police repression. Among the Kingdom’s half million citizens, the in-group is composed of Sunni Muslims, with the ruling family at the center. Next come Shia Muslims and a few dozen Jews.
They are all outnumbered by foreigners, who form 80% of the country’s work force. Here too, there is a strict hierarchy: Arabs from Gulf countries can be executives and consultants. Other Arabs and educated South Asians can be clerks. Maids are Filipina. Sex workers are Eastern European and Asian. Construction workers are Bangladeshi. It almost goes without saying that women have fewer rights than men.
As an American and a member of a high-level delegation, I moved easily across lines. I could speak up and be heard in meetings with men twice my age. I ate lunch with the three female Bahrain Defense Force medical officers who attended our meetings, which would have been inappropriate behavior for my male colleagues. I went shopping in the pearl and gold markets in the evening with the guys from the delegation, while black-veiled Bahraini women shopped in quiet malls during the day.
Foreign workers have no such flexibility. They are allowed into the country to perform a specific job and can be transferred or sent home without their consent. Despite recent reforms, many are still employed under a sponsorship system that allows employers to withhold their passports and wages and leaves them vulnerable to exploitation of all kinds.
I became aware of this oppressive system in brief glimpses of Bangladeshi workers on scaffolds in the intense, humid heat and Pakistani restaurants crowded with men seeking a taste of home. That’s when I realized that I was safe. I was a privileged, protected “other.” In spite of my fears,
if I had revealed my Jewishness, I would probably have suffered nothing more than a moment of uncomfortable silence.
I left government service long ago and now I live in Israel. I assumed I would never go back to the Gulf, but with Bahrain and the UAE opening diplomatic relations with Israel, it just might be possible. This time, I would be coming not from Mt. Olympus, but from Mt. Moriah, the holy plateau in the heart of Jerusalem, which sits just across the valley from my home.
Read article in full
Posted by bataween at Thursday, November 12, 2020

Email ThisBlogThis!Share to TwitterShare to FacebookShare to Pinterest
Labels: Israel/Bahrain, Jews of Dubai and Gulf states, Jews of Bahrain