How Ashkenazim and Sephardim mixed in the Old Yishuv

There was a surprising degree of intermarriage between the orthodox Ashkenazi and Old Yishuv communities living in 18th century Palestine. They were both small, poor and relied on the munificence of the Sephardi community of Istanbul. Fascinating article in Jewish Link by Joel Davidi Weisberger: 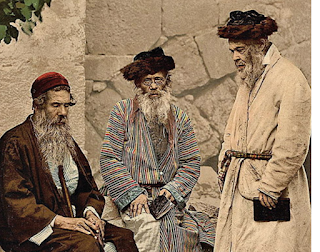 Two Ashkenazim and a Sephardi in the Old Yishuv
By the mid 18th century, separate communities of Ashkenazim and Sephardim developed in various parts of the Land of Israel. While there had been various Jewish communities in the Holy Land since the destruction of the Temple, the Sephardic community of the “Old Yishuv” owed its genesis to descendants of Spanish exiles who arrived in the years following the great expulsion in 1492.
The Ashkenazim, on the other hand, arrived in several waves, the most well-known being the aliyah of the chasidic community on the one hand and those of the misnagdim—disciples of the Gaon of Vilna—on the other. The former began arriving in the mid 18th century while the latter came about a half century later The chasidim and perushim (as the misnagdim came to be known) formed their separate communities.
Because of the very small size of both communities and the common challenges that they faced, it wasn’t long before there was a degree of intermixing (something unheard of back in Eastern Europe where the chasidic-misnagdic battles were still raging). Another interesting phenomenon is the slow and steady rate of intermingling between Sephardim and Ashkenazim. This was perhaps more evident among the chasidim (who as I mentioned in previous articles adopted a modified Sephardic rite based on the writings of the Arizal, who was himself of both Sephardic and Ashkenazic parentage).

I had a old National Geographic that was published after World War I ..had hand colored pictures just as shown in the article....