The warming  relations  between Israel and the Gulf states has prompted Iraqi Jews to call for  the restoration of their rights   Edwin Shuker, vice president of the board of deputies of British Jews and former vice president of the European Jewish Congress, wrote in a letter Aug. 19 addressed to Iraqi Prime Minister Mustafa al-Kadhimi, al-Monitor reports. “We feel the time has come to put a stop to the policy of exclusion based on race or religion,” Shuker told Kadhimi in his letter. (Moreover, Jews cannot hope for restitution of their property unless they are re-nationalised'). 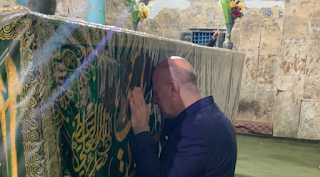 Edwin Shuker on a visit to the shrine of Ezekiel at Kifl in Iraq
Shuker visited Iraq several times and he went to Baghdad, Mosul and even the holy Shiite city of Najaf. He visited several Jewish holy sites in different parts of Iraq, from the north to the far south. He produced a film called "Remember Baghdad" on Iraq's last Jews telling the story of their homeland Iraq. Al-Monitor asked Shuker about the intention behind demanding his citizenship back.
“I was born in Baghdad on July 23, 1955, to Iraqi parents and my ancestors have been living on this land since 586 B.C.,” he said. “My right for nationality is guaranteed by the Iraqi Constitution.”
After the removal of the Baath party in Iraq in 2003, Iraq's Nationality Law was amended in 2006. The new law provides the right to restore nationality for Iraqis who had lost theirs as a result of political, racial or sectarian factors. But Article 17/II of this law expressly excludes Jews and only Jews from pursuing this option.
“Iraq cannot begin to build a civil society with rights to its citizens until it reconciles with the injustice committed against many of its components including the Jews,” Shuker said. “It is time to start this process.” Menuhin believes that demanding the right to citizenship is “a moral matter” for Jews. They are not thinking of returning to Iraq, especially in these critical circumstances, but they would like to keep the connection.
“Jews were excluded from returning to Iraq, even though they were the original inhabitants of Mesopotamia and carry a history of 2,600 years,” she said. “They contributed to building Iraq in all periods — especially in the modern era.” Israel opened a virtual embassy in Iraq in 2018, which has attracted thousands of Iraqis on Facebook.
“Restoration of citizenship for Iraqi Jews contributes to implanting cultural pluralism in Iraq and promote justice,” Menuhin noted. “For the above reason, Iraqi civil society actually is pushing toward this goal much more than the Iraqi Jews themselves.”
In the same vein, Shuker told Kadhimi, “The opportunity is there for Your Excellency to reverse the policy of exclusion and begin an era of building bridges, ending past injustices and connecting with Iraqis in the diaspora who would welcome the opportunity to help rebuild the country with their skills.”
Read article in full
Posted by bataween at Sunday, September 06, 2020