Flm advocates against return of Jewish archive to Iraq 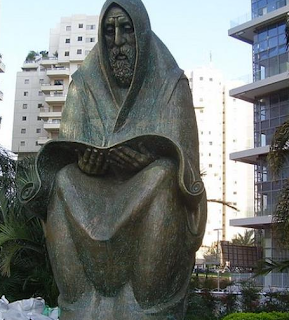 'Prayer', a sculpture in Ramat Gan, Israel, memorialises the Iraqi Jews murdered in the Farhud massacre of 1941 and the Jews executed in the late 1960s.
A new documentary, Saving the Iraqi Jewish Archives: A Journey of Identity, aims to highlight the existence of the archives and the Iraqi Jews who would like to reclaim them.
The fourth in a series of documentaries detailing stories from Iraq's Jewish community, culture and history, produced over the last 25 years by Carole Basri and Adriana Davis of D-Squared Media, the film highlights the stories of those connected with the archives such as the student who found a photograph of himself in his school transcript, and Harold Rhode, one of the individuals who made the discovery.
“This film relies on the personal meaning attached to items that verify an existence: birth, marriage and school records, religious books and artifacts, family photographs, and, most importantly, each person’s right to possess them,” Basri and Davis said.
“When the community decided to speak out publicly, in our previous films, it was with trepidation; but they realized it was an important way to put their lives on the record. Today, they speak with one amplified voice to Save the Iraqi Jewish Archives for their descendants whose ancestry is forever linked to the land between the rivers. With only five (now four - ed) Iraqi Jews left in Iraq, now it is crucial.”
Read article in full
Posted by bataween at Wednesday, September 16, 2020

Please give this link to the Isreali Iraq Jewish Communtiy
https://ijarchive.org/search