The Yemenite children affair prompted accusations that children had disappeared from public institutions during the state’s early years, but has never been studied from a medical point of view. Yechiel Michael Barilan writes in Haaretz that the poor health of the Yemenite immigrants gave Israeli doctors no choice but to separate children from their parents. (With thanks: Yoel) 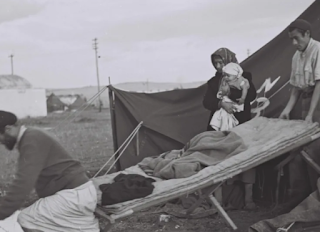 There was in general much misinformation and misunderstanding surrounding medical institutions and health regulations during the state’s early years. Advanced medical tests ostensibly carried out for the immigrants’ benefit were sometimes interpreted by later critics as being “human experiments” and referred to in offensive language.

According to the medical doctrine that prevailed at the time, the body of a dead infant was not shown to his or her parents, for fear of causing psychological trauma. The law did not obligate the attending physician to issue a death certificate, and there were no organized procedures or rules relating to keeping medical records, discharge of patients, registration of the deceased and burial. Many parents did not ask for a death certificate from the district health bureaus, as this entailed relinquishing the deceased’s food coupons.

Others did not do so simply because they had no knowledge of the procedure or were unable to pay the required fee. In some cases, pressure was exerted on medical staff not to report a stillbirth so as not to deprive the family of the post-natal grant. Also, in the absence of refrigerated rooms to store the dead, and in some cases also for fear of epidemics – it was necessary in many cases to bury the deceased before the family was located.

For the Yemenites, care for a child away from the parents, his or her death and burial before the parents were even informed was unheard of; but for all other immigrants, this was the reality of modern life, especially in the chaotic occident, following the social instability of the world wars, the Great Depression, the Holocaust and the communist revolutions.

More about the Yemenite children affair
Posted by bataween at Wednesday, August 05, 2020

The treatment of the Children is sore spot the Yemenite Jewish COmmunity will neither forgive nor forget...calling out to the L-d for Justice..on those responsible....