According to Jewish Journal and other media, Jewish organisations in Canada have moved to condemn an anti-annexation march on 4 July in which the antisemitic chant 'The Jews are our dogs' was heard. Historically, the slogan was chanted by Arab mobs, for instance in the Nebi Musa riots of 1920. The chant has long been associated with the assertion of Muslim superiority over dhimmi Jews; dogs were viewed as ritually impure. 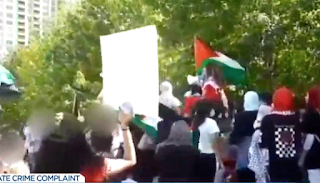 Canadian high school students at the march chanted 'the Jews are our dogs'.

B’nai Brith Canada announced in its statement the Jewish organization has filed a hate crimes complaint against the protesters.

“The display of anti-Semitism in Canada’s public squares is totally unacceptable,” B’nai Brith Canada CEO Michael Mostyn said in a statement. “Opposition to Israeli policy can never be used as an excuse to demean Jews as ‘dogs’ or to threaten violence against them.”

He added: “We have reached out to the high school attended by one of the rally’s organizers, and hope to visit at an appropriate time in order to educate students about the dark places to which rhetoric of this sort can lead.”

Toronto’s Centre for Israel Jewish Affairs (CIJA) Chair Barbara Bank similarly said in a statement, “There is a lot of room for legitimate discussion about the State of Israel and the politics of the Middle East, but our community will not accept the use of Israel as a pretence to call Jews ‘dogs.’

This is not just offensive. Hate directed at Jews and other communities has a toxic impact on our city, province and country. Hatred that starts with words all too often ends in violence.”

Read article in full
Posted by bataween at Saturday, July 11, 2020

and because not many people know about Mizrachi Jews, they won't realise what history the insult is rooted in

The high school students today chant "The Jews are our dogs". The original full chant was "The government is with us and the Jews are our dogs". This reflected the belief widely held by the marchers that the British authorities were encouraging mob violence against the Jews so that they could justify reneging on the promise to build a Jewish homeland in Palestine.