Today is Lag Ba' Omer, the 33rd day of the Omer, the period between Passover and Pentecost (Shavuoth).  (With thanks: Leon)

The Omer marked a time when the scholar at the time orf the Roman occupation of Judea, Rabbi Akiva, and his 24,000 disciples, suffered a plague.  On Lag' Ba Omer, the dying ceased. It is also the anniversary of the death of  the mystic Rabbi Shimon Bar Yochai and is celebrated with the lighting of bonfires and parades in Israel. 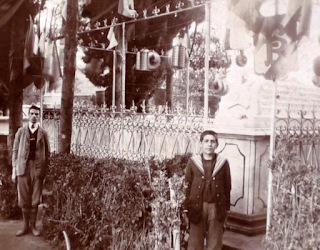 In Algeria the Jews had their own customs on Lag Ba' Omer.  Mrs Gisèle L recalls a 1913 pilgrimage to the tomb of Yehoshua Elkaïm (1831 - 77) in Medea, a town some 68 km from Algiers. Rabbi Elkaïm was so well regarded that even the Bey went to him for advice.

At nightfall a large crowd would gather at the Elkaïm synagogue. They carried a candelabra bedecked with candles to the cemetery by car. A procession followed on foot. On arrival each of the candles was lit and each one placed on a grave.

There was a festive return to the town, the candalabra was put away and the celebrants sang and danced into the night.