From mini-skirt to hijab: one Iranian-Jewish woman's story

She was named after Jackie Kennedy and loved to wear mini-skirts. Jacqueline Saper grew up under the pro-western regime of the Shah of Iran. After 1979, she lived through the turbulent years of the Islamic revolution until she and her family were able to escape to the US in 1987.  Madeleine Kingsley of The Jewish Chronicle reviews her story: 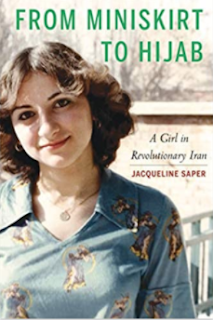 Everyone laughed at their Seder when a cousin joked that they had no reason to recite the toast, “Next year in Jerusalem”, because they already lived in the best place on earth.

Jacqueline could see that 1970s Tehran was not everyone’s idyll. Reza Shah’s spectacular parties highlighted the great divide between the wealthy and the have-nots — like her own family’s maids. In 1975, the Shah abolished the multi-party system and, a year later, the Muslim calendar. Violent demonstrations ensued; anti-Shah strikes brought fuel shortages and bread queues. In the freezing cold, Jacqueline’s father would rise at 6am to queue for supplies. Three quarters of the 100,000-strong Jewish community fled, including Jacqueline’s brother and, eventually, her older sister.

The writing on the walls read, “Death to the Shah”. Jacqueline’s father would not see it. The King of Kings, he judged to be invincible — until 1979, when Iran’s tolerant, affluent and cultured world unravelled. Saper’s recall of the medieval morality imposed by the returning Ayatollah Khomeini (“the Redeemer”) chills the spine. Doubly discriminated against as Jewish and female, her constrained life could be drawn straight from Margaret Atwood’s Testaments.

Barred from higher education, Jacqueline married at 18 and moved, with Ebi, a student doctor, to Shiraz — once, but no longer, the city of wine. Modesty police stalked the streets and called her a “bloody whore” for failing to wear the veil. Women could not shake hands or smile at men. A TV cleric claimed it was scientifically proven that women’s hair drove men mad. Anyone found drinking alcohol risked a flogging.

To circumvent antisemitism, Jacqueline called herself Jaleh and, like so many, concealed her thoughts, living her internal life under cover of false allegiance. Escape seemed impossible. Jewish families were prevented from leaving the country together. One such family secured passports by converting to Islam. The longing to leave redoubled when Jacqueline and Ebi’s daughter started first grade, wearing the hijab in a drab and joyless school where she kissed the Ayatollah’s picture.

An opportunity arose when Ebi was invited on to a medical course in Texas and, by some miracle, it was agreed that his wife and two young children could go, too. The young family left with nothing, no household possessions, no jewellery, no promise of work or home, and certainly no matzah. On this essentially secret exodus, they carried just a couple of suitcases and memories untold until now.

From Miniskirt to Hijab by Jacqueline Saper (Potomac Books, 2019, £20)

I was in Iran - admittedly as a child - before the Shah fell. All the "educated, cultured, top-of-the-pile" people were critical of the Shah and had high hopes for when the Ayatollah would return.