Levana Zamir, president of the Association of Jews from Egypt in Israel, was one of the participants in a message broadcast by the Israeli president, Reuven Rivlin, on the occasion of the state's 72nd independence celebration.

The president and all the participants wished the country a very Happy Independence Day.'We have no other country', he said.

Then a 10-year-old child, Mrs Zamir said she could not forget the great joy her family felt on the day of the UN vote on Partition in November 1947. Her father was listening in secret to the radio and the family brimmed with excitement as the votes were announced: Yes -No-Yes-Yes. But as soon as the vote was passed, no Jew could utter the world Israel: their lips were sealed - until they were thrown out of Egypt.
She recalled her enormous excitement on seeing the IDF Independence Day parade, in which women soldiers marched. 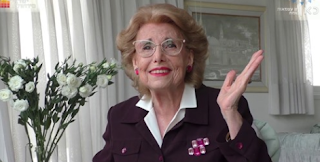