As testified by the renovation of the Eliyahu Hanavi synagogue in Alexandria and other projects, there is remembrance of extinct Jewish communities in Arab and Muslims countries, while in Israel there is community without remembrance. It is time for Israel to build a museum dedicated to Jews from Arab and Muslim lands, argues Ashley Perry, who has been the impetus behind initiatives in government and the Knesset. Must-read in JNS News: 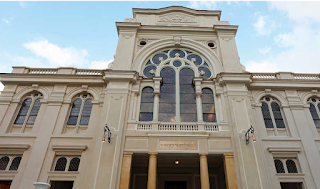 Exterior of the renovated Eliyahu Hanavi synagogue in Alexandria

On the whole, it is a positive move back towards recognition of these nations’ Jewish communities that were either wholly erased or significantly reduced during the last century’s exodus and expulsion of almost a million Jews from Arab and Muslim countries.

However, due to the lack of a significant Jewish community in these countries, these restoration projects are merely about bricks and mortar and rarely about reaching out to the communities, or their descendants, who remain largely unwelcome in the lands where their families lived for centuries and even millennia.

Considering that the majority of Jews in Israel have ancestry in the Middle East or North Africa, this is negligence at best. For many decades the issue was almost completely ignored, or actively kept off the national agenda for a variety of reasons, from not wanting to further complicate complex relations with neighboring countries, to trying to sever Jews from these nations from their history and culture, which was largely associated with the Arab enemy.

This permeated the mindset of subsequent generations of Mizrahi Jews in Israel, who were told explicitly or implicitly to forget about the past and look to the present and future. Of course, such an attitude was reserved solely for them; European Jews would have been rightly outraged had such an approach been taken with regard to them.

To ignore the history and culture of Mizrahi Jewry is not to tell the full Jewish story, whether to ourselves or outsiders. Thus, it is no surprise that most around the world fail to fully grasp Jewish indigenous and ancestral rights and see us as a foreign European import.

Even when the issue was finally placed on the national and international agenda during the past decade, it was no easy undertaking. In 2011, the National Security Council, which sits in the Prime Minister’s Office, wrote a decision this author was proudly centrally involved in, to the effect that, among other recommendations on the issue, Israel was to build a museum dedicated to the Jews from the Middle East and North Africa. However, nine years later, pitifully little action has been taken to achieve this.

Isn't mr. Perry aware of the museum that is presently being built in jerusalem as is noted in the bottom link (and on which I commented)?

It is not yet being built, this is a model of what the Museum might look like.

My question is : who is going to use the Synagogue in Alexandria, when there is no hope of a minivan?