Since 1949, there have been no Jews living in Najran, an area of Saudi Arabia that was conquered in the 1930s from Yemen. According to Elder of Ziyon, a mysterious video clip has been doing the rounds of Arab media. It shows a man who claims to be a Jew from Najran, a city in southwestern Saudi Arabia near the Yemen border. He is inviting Jews to visit him, claiming that there are 1,000-year old synagogues to see in Najran. Is it possible that the man's family was converted to Islam, or simply refused to join the exodus? Or is he a vehicle for the regime to join the Arab chorus inviting Jews to return (see here, here, here and here) to the kingdom, in the light of warming relations with Israel? 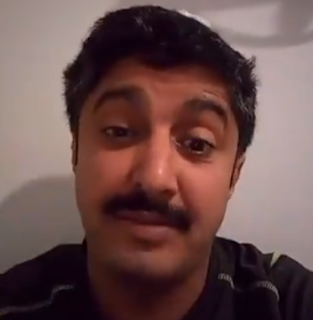 A 'Jew' has surfaced in judenrein Najran.

'There were a number of Jews originally from Yemen who had conquered Najran in pre-Islamic times', writes Elder. 'In 1934, the town came under Saudi rule and the Jews were persecuted. In 1949 the Jews fled back to Yemen and from there they went to Israel.

'This man, however, claims that he still lives in Najran as a Jew and he is inviting Jews from around the world to visit him, where he can show them ancient synagogues -one that is a thousand years old and one that is over 1500 years old.It shows a man who claims to be a Jew from Najran, a city in southwestern Saudi Arabia near the Yemen border.'

Elder can find no evidence of synagogues in Najran on the web.

The Jewish Virtual Library describes how Jews in Najran enjoyed more freedom and equality than Jews in Yemen: According to Yemenite Jewish tradition, the Jews of Najrān trace their origin to the Ten Tribes. They lived in the region of Najrān in Saudi Arabia and were the only group of Yemenite Jews who lived outside Yemen under the rule of another kingdom.

On the strength of the laws of the desert and tribal protection, they were not subjected to persecution as were the Jews of Yemen. They enjoyed the same equality of rights as the Arabs of Saudi Arabia, were not taxed, and did not pay the *jizya (the poll tax imposed on non-Muslims in the Muslim countries "in exchange for the protection" granted them by the government).

The Bedouin of Saudi Arabia, who belonged to the Sunni Islam sect, practiced religious tolerance toward them and ate meat slaughtered under their laws of sheḥitah. The Jews of Najrān carried weapons in self-defense, as did the other inhabitants, and were renowned for their courage and strength. There was no other place in the Arabian Peninsula where Jews lived in such dignity and freedom as in Najrān.

By profession they were craftsmen: they worked essentially in goldsmithing and repairing arms. They earned a good livelihood and their material conditions surpassed those of Yemenite Jews. Their settlements were scattered throughout Najrān in small units of two to forty families. They lived in clay houses or in huts. Their clothes, of both men and women, were slightly different from that of Saudi Arabians and Yemenite Jews.

The strict barrier between men and women, which was customary in social life throughout Yemen, was nonexistent among them. At festivities and celebrations men and women sat together and women danced to the sound of the men's singing.

According to Wikipedia : There was a small Jewish community, mostly members of Bnei Chorath, lived in one border city from 1934 until 1950. The Yemeni city of Najran was conquered by Saudi forces in 1934, absorbing its Jewish community, which dates to pre-Islamic times.[10] With increased persecution, the Jews of Najran made plans to evacuate. 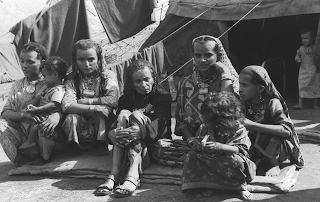 A Jewish family from Najran in an Israeli ma'abara.

The local governor at the time, Amir Turki ben Mahdi, allowed the 600 Najrani Jews[11] a single day on which to either evacuate or never leave again. Saudi soldiers accompanied them to the Yemeni border. These Jews arrived in Saada,[12] and some 200 continued south to Aden between September and October 1949.

The Saudi King Abdulaziz demanded their return, but the Yemeni king, Ahmad bin Yahya refused, because these refugees were Yemenite Jews. After settling in the Hashid Camp (also called Mahane Geula) they were airlifted to Israel as part of the larger Operation Magic Carpet.[13]
Posted by bataween at Thursday, February 13, 2020