Fox News has reported on the consequences of a future agreement (MOU) which the US intends to sign with Yemen. This is intended to protect national and cultural heritage, but would in effect legitimise the theft of Jewish property. Jews have taken Torah scrolls and other Jewish property while fleeing persecution in Yemen. Following a campaign by JIMENA, some 150 comments were filed, objecting to the Memorandum of Understanding on the grounds that it would criminalise Jews for taking what is rightfully theirs. The US Cultural Committee hearing was held on 29 - 30 October. 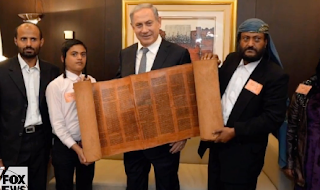 Members of the Dahari family leaving Yemen for Israel brought out a scroll which had been in their possession for decades. A Jew was arrested in retaliation.

When Jews fled Yemen, they took along their highly-valued religious items and artifacts. One such item is a Torah Scroll, believed to be hundreds of years old, that was smuggled out of Yemen to Israel by the family of Manny Dahari. Dahari's family has owned the scroll for at least 300 years, but Yemen’s government is hoping to get it and other Jewish items back, claiming them as “national cultural artifacts.”

Yemen's government has filed a request with the U.S. State Department for a Memorandum of Understanding, which if granted would recognize Yemen’s ownership of the items.  Anyone transporting or possessing such items, like the Daharis’ Torah Scroll, could face sanctions.

Read  Jerusalem Post article in full (with thanks: Lily)

If this goes through, it would set a nice precedent, where Israel could expel their Muslim minority, and then claim the Temple Mount Mosques ("al-Aqsa & Dome of the Rock"), as their own national heritage.