A monument is being unveiled today in Jerusalem’s Mekor Chaim neighborhood marking the 70th anniversary of the Hurum Air Disaster, in which an Aero Holland plane transporting Jewish children from Tunisia who were to transit through Norway while immigrating to Israel crashed near Oslo, killing three counselors, four crew members and 27 children. Story in the Jerusalem Post: 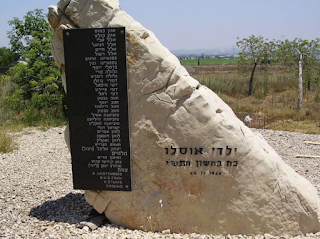 “Aliyah for North African Jewry has not been easy. That is why we are doing this event,” Felix Perez, one of the organizers of the event, told The Jerusalem Post. “It’s not only about the 70th anniversary of the Oslo Children’s Disaster.”

More about the Oslo air disaster
Posted by bataween at Wednesday, November 20, 2019