President Abbas's decision to reprint the memoir of an Iraqi Jew - Yitzhak Bar Moshe -  is a significant departure: instead of blaming the flight of Iraqi Jews to Israel on the Zionists, he is acknowledging that Arab regimes were responsible for creating Jewish refugees. This is a good thing. However, it is clear he also wants to draw an equivalence between Palestinian refugees, who were fleeing a war zone, and Jewish citizens of Arab countries, who were non-combatants far way from the conflict with Israel. Abbas might also wish to  use Bar Moshe's book as a tool to attack the Zionist establishment for discriminating against the incoming refugees, and disrespecting Bar Moshe's work. He makes the mistake, common on the far left,  of assuming that Arabic-speaking Jews are a bridge to peace because they shared a common language and culture with Muslims. In fact it is their bitter experience of persecution which makes them more mistrustful of peace initiatives.

The Times of Israel reports (with thanks: Lily)

“The president plans to re-print Bar Moshe’s book Exodus from Iraq in Arabic soon because he wants to inform Palestinians, Arabs and everyone else about the Jews of the Arab world.

He wants them to know what happened to them in Iraq but also in the transit camps in Israel,” Darwish, a cousin of famous Palestinian poet Mahmoud Darwish who was friends with Bar Moshe, told The Times of Israel in a phone call. 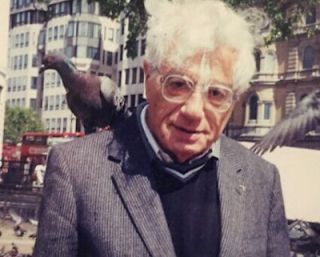 Yitzhak Bar Moshe, who  died in 2003 (Photo by his daughter, Idit Shemer)

“He told Bar Moshe’s family yesterday that he first read the book when he was living in Syria and that it made him cry. He said he thinks it is so important because it shows how the suffering of Iraqi Jews is not different from that of the Palestinian people,” Darwish added, noting he plans to give it to “many of the people he will meet after he receives the new copies.”

Darwish said both the Bar Moshe family and the Sephardic Community Committee, which originally printed the book, granted Abbas permission to commission the re-printing of the book.

“Leaving Iraq,” the book that made Abbas weep with recognition 40 years ago, describes how Iraqi Jews — who were, in Baghdad, an integrated and respected elite — ended up being persecuted and losing their rights.

The governments forced them into exile, but they never stopped loving their place of birth. ‘It’s sad that my father was never respected in Israel’

This is not the first time Abbas has expressed his admiration for Iraqi Jews. “The behavior of Arab regimes toward their Jewish citizens is indescribably saddening and painful, and must be repudiated,” he wrote in 1977, not long after reading Bar-Moshe’s book.

“We turned them into enemies and made them stand against us without giving them another choice. We forced them to choose between emigrating to Israel and imprisonment or death,” he continued. 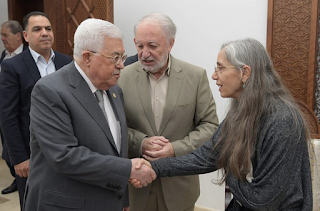 Abbas has also written about discrimination against Mizrahim in Israel, labeling Zionism “an Ashkenazi movement” whose “crazy obsession” with Arab Jews has embittered their lives.

He once called on the Arab states to offer financial aid to Arab Jews as an enticement to bring them back from exile.

Given that the return of Jews to Lebanon, Iraq or Syria is now impossible, why is Abbas so interested in distributing “Leaving Iraq” to Arab leaders?

“I want them to read it, because it tells the truth,” he says. “And also because they don’t know that there is a large, peace-seeking Arab-Jewish public — Jews who listen to Umm Kulthum at home and who write in Arabic.”