It is by now an established  fact that much of the work produced about the Arab-Israeli conflict in western universities can be considered tendentious. Dr Moshe Behar of Manchester University, a member of the Mizrahi Democratic Rainbow, is  predictably critical of Israel in his research. But one paper (scroll down) he presented at a conference to debate the One-State, Two States question, has some surprising insights of interest to Point of No Return readers. 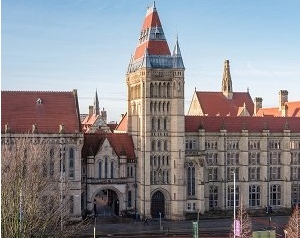 Manchester University, where Dr Moshe Behar is a senior lecturer

Behar contends that a huge body of academic writing zooms in on the 'Liliputian' territory of Israel/Palestine, while the regional dimension of the conflict is undervalued. From 1936 *, and the outbreak of the Arab Revolt against the British in Palestine, he argues, the Arab/Zionist dispute spilled over into Arab politics, and became a topic of domestic concern in Arab countries.  It's what he calls the 'butterfly effect': - a small change in one place can have large effects elsewhere'. Yet in their focus on 1948 and not 1937, scholars have effectively dismissed the 'butterfly effect' as 'residual dust - a historical nuisance to be brushed off'.

The result  of the 'butterfly effect' was an antisemitic backlash against local Jewish communities in Arab states - collective punishment for what the 'Zionists' were doing in Palestine. There were calls to boycott Jewish shops. By the mid- to late 1930s, Jews  were being murdered in Baghdad. The Islamic ulema called for jihad  in Egypt and Iraq. In 1939 Young Egypt planted bombs in synagogues. In Iraq, Jewish clubs were targeted.

Shortly after these bombings, an adviser to the Iraqi Ministry of the Interior wrote  to his superior: 'Before long a demand might arise  for the expulsion of all Jews from Iraq. It was not entirely fantastic to visualise the 90,000 Jews of Iraq being escorted across the Euphrates (sic) and told to run the gauntlet to this Palestine of theirs.' These words proved prophetic, as it was barely 12 years later that the Jewish community was forced out of Iraq.

Behar spreads the blame for conflating Jews and Zionists,  equally - between the Zionists, the Arabs and the British.

Controversially, Behar argues that Arab atrocities such as the Farhud massacre in Iraq are overblown by Zionist academics in order to detract from Zionist 'misdeeds' in Palestine. But he completely underestimates the influence of anti-minority ultra-nationalism in Arab states, the exploitation of Jews as a distraction from domestic issues, and the impact of anti-Jewish incitement by the Palestinian Mufti and the Muslim Brotherhood. Jewish declarations of loyalty and hostility to Zionism proved utterly futile in the end. Even anti-Zionists were forced to flee.  And  the butterfly effect impacted on other minorities who had no Zionist movement of their own.

The antisemitism of British diplomats clearly shows through in their reports back to the Colonial Office. But it has to be said that British rule was overwhelmingly positive for the Jewish minority in regional terms.

To blame the Zionists for the plight of MENA  Jews is even more difficult to argue. At the time, the Zionists  were singularly uninterested in Jews in Arab countries, directing all their efforts at rescuing the Jews of Europe from Nazism.

Our conclusion still stands:  If it had not been for Arab and Muslim antisemitism  Jews in Arab countries would not have been compelled to flee.


Here is some info about the Farhud in Iraq and other events there, including the massacre of the Assyrians, the mufti of Jerusalem in Iraq at that time, and reactions of British and French writers about and to the Farhud and other mass murder events in Iraq
http://ziontruth.blogspot.com/2006/06/mufti-of-jerusalem-incited-1941-farhud.html

on the massacre of the Assyrians in Iraq
http://ziontruth.blogspot.com/2006/05/before-iraqi-massacre-of-jews.html

how George Antonius defended the massacre of the Assyrians
http://ziontruth.blogspot.com/2006/05/father-of-arab-nationalist-fake.html