The current demonstrations in Iraq  are producing some interesting messaging. Here is a placard bearing the words "Sectarianism is ended, we demand [of our government] that our Iraqi Jewish people [gain the right to] return to their homeland Iraq". 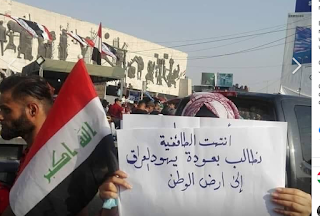 It is interesting that disaffection with the current government and sectarianism translates into a nostalgia for the 'golden age' of Iraqi pluralism in the first half of the 20th century. Then King Faisal had proclaimed himself king of all Iraqis equally, irrespective of religion: Muslims, Jews and Christians.

Jews can find such philosemitism flattering, but ultimately it belongs in the realms of fantasy. No Jew wants to return to Iraq, where there are barely five Jews. Instead of turning the clock back,   Iraqis who want change need to recognise that over 70 years have passed and the Iraqi Jews are no longer the community they remember with such affection.

These demonstrators must come to terms with Israel, given that most of the descendants of Iraqi Jews are Hebrew-speaking Israeli citizens.
Posted by bataween at Wednesday, November 06, 2019

Anyway it's still a nice gesture.