There is a famous Arabic saying ' Bukra fil mishmish' - literally 'tomorrow, when the apricots bloom.' It's the languid Egyptian equivalent of 'when pigs fly' .

In the 1930s and 40s, Egypt was home to a thriving film industry. The work of Walt Disney became popular. It was then that the three Frenkel brothers, David, Herschel and Shlomo, hit on the idea of introducing a typically Egyptian character into animated films screened in Egypt -  Mishmish Effendi. 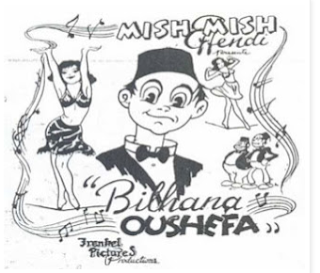 Mishmish Effendi got his name when a sceptical producer refused to back the brothers' work, telling them: 'Bukra fil mishmish'.  But the fez-wearing character soon became a household name in the 1930s and 40s. The Frenkel brothers, whose Ashkenazi family was driven by the Turks from Palestine to Egypt during WWI, were at the peak of their career.

The best years lasted until the early 1950s - when like thousands of Jews, they were forced to leave. Egypt confiscated Jewish property, replaced Jews with Muslims, and accused Jews of sending smoke signals to Israel.

The Frenkel story encapsulates the tragedy of Egypt's Jews. It  is now the subject of a new one-and-a-quarter hour documentary, Bukra fil Mishmish, directed by Tal Michael and produced in Israel by Cassis Films. A story of displacement, frustration, and failure. In France, the brothers doggedly waited for the apricots of their career to bloom. They shifed to colour from black-and-white and ingeniously invented a portable projector so as to pitch their ideas to one producer after another. They sank all their savings into one last film in 1964. It flopped.

The film follows Didier Frenkel, son of Shlomo, into the basement of the family home. Ancient film reels are gathering dust. This is the oeuvre of the Frenkel brothers, salvaged from Egypt, which Didier's embittered father had wanted destroyed. The reels are shipped off to be restored at France's leading film laboratory. After decades in a crate, Mishmish Effendi is given a new lease of life.

But there is another side to the story: Didier's surviving mother, Marcelle, reveals the tension at the heart of the family dynamics. She and Shlomo and their three children shared their house in Montgeron with David and Herschel, who never married. She is the down-to-earth Sephardi who wanted to join her family in Israel and start afresh, while the brothers ranged against her - united  'as the fingers of one hand' in clinging to their futile film-making dreams. They disparaged Marcelle's voice of reason. For her, a better tomorrow never came: 'bukra fil mishmish'.

The plight of the Frenkel brothers mirrors that of actors, artists and musicians who plummeted from fame after their uprooting from Arab countries. There was Zohra al-Fassia, who once sang for the king of Morocco but ended up shuffling around aimlessly in her dressing gown in a tiny Israeli apartment. Souad Zaki, a famous Egyptian singer,  became a cleaning lady in Tel Aviv. And the el-Kuwaity brothers, once the darlings of the Iraqi music scene, were reduced to selling kitchen utensils in the Hatikva market. To add insult to injury, their names were erased in their native land, although their songs were still played.

As with the El Kuwaity brothers, so with the Frenkels. But Mishmish Effendi has been rehabilitated recently in Egypt and the Frenkels are no longer forgotten. Fifty years too late for the brothers - who died despairing and disappointed.

The film has been produced with French and English subtitles. Enquiries :costanzafilms@gmail.com

I wonder if any of the (sadly declining) film festivals that specialize in material from the first half of the 20th century would be interested in a screening.

Or, like with many early Disney cartoons, would these be considered too politically incorrect for the times.

I'm sure the producers will try this route

What I find interesting is that even though the mizrahi superstars saw their careers plummet when they came to Israel, it seems that those who went to France also saw careers plummet. I would imagine the same thing also happened in the UK. And I only know of less than a handful who made it in Hollywood - most (with a couple of exceptions) being of Turkish Jewish descent.