Embracing rather than erasing Mizrahi culture

This article by Sasha Goldstein-Sabbah in HaSepharadi takes up the familiar theme of Middle East and North African Jewry suffering 'discrimination' by the Israeli establishment. It has some interesting insights, but fails to differentiate between the various Mizrahi groups. It assumes that Mizrahi Jews were 'coerced' into abandoning  their customs and languages, when many were all too eager to change their names,  learn Hebrew and integrate into the new state. As for Ashkenazim getting better housing and jobs it is almost never stated that many were able to move out of the ma'abarot thanks to reparations they received from the German government. (With thanks: Isaac) 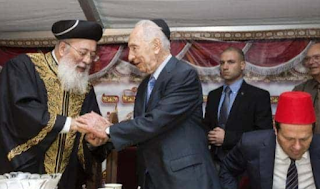 In the period between 1948-1973 over a million Jews left the Middle East and North Africa (MENA). It’s no secret that this experience was traumatic. Historic Jewish communities dissolved overnight, families were separated and many were left impoverished due to autocratic governments, political insecurity, and corruption.

The trauma of exile was compounded for those who went to Israel by the atrocious conditions of the maʿabarot (transit camps) in the 1950s and later resettlement in remote development towns along Israel’s border. The experiences left an indelible mark on MENA Jewry, but it was not only the dreadful living conditions (which many Eastern European Jews experienced as well) that traumatized MENA Jewry. More shockingly, MENA Jewry were treated as second class citizens by the Ashkenazi establishment who saw their languages and cultures as inferior to that of the Germanophile Ashkenazi majority at the time.

It is well documented that many political leaders in the early years of the state viewed Eastern European Jewry as having greater potential than MENA, not a surprising bias given the shared origins. Furthermore, government leaders feared that lack of enthusiasm for Zionism, connections to Arab communist parties, and apathy towards an agrarian lifestyle in many circles of MENA Jewry could engender political instability in the already fragile state. As a consequence, these concerns and biases translated into Ashkenazim being allocated better housing, jobs, and more access to higher education due to their perceived superiority, ultimately resulting in socio-economic differences which are felt to this day in Israel.

Read article in full
Posted by bataween at Thursday, November 14, 2019