According to Jenni Frazer writing in Jewish Weekly,  a public 'groundbreaking' initiative bringing together Arabs who want normalisation with Israel has been held in London. However, no Israelis were present, because some of the delegates could have been subject to prosecution in their home countries for the “crime” of normalising relations. See my comment below.

The participants came from all over the Arab world, and were young and old, men and women, diplomats, media and arts personalities, often at odds with the leadership of their states but taking a nuanced and independent route to talking about the resolution of the Arab-Israel conflict. 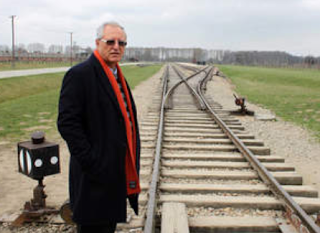 Some of the delegates, such as Mohammed Dajani, a Palestinian academic who shocked the Arab world by taking a group of his students to Auschwitz, were already well known to Israeli activists.

But many of the opinions were highly significant, not just because they are music to Jewish and Israeli ears, but because this is the first time that such declarations have been made in public and on the record.

Taking place, by coincidence, on the anniversary of the late Egyptian president Anwar Sadat’s historic 1977 visit to Israel, the conference, warmly commended by US diplomat and long time Middle East peace negotiator Dennis Ross, produced some revelatory discussions and presentations. Not least were numerous personal stories about good relations with Jews, and a plea from several participants for Jews to return to Arab countries and work there for reconciliation.

Professor Dajani suggested that the stories of close interaction with Jews could be collected and published by the new Arab Council.

Extremism and terrorism were deplored, and concern expressed about “brainwashing” of children in school and of students at university level; and, remarkably, from the clerics Hassen Chalghoumi, a condemnation of the “politicization” of Islam, and from Lebanon’s Saleh Hamed, a plea to Europe to crack down on the number of mosques in which imams were preaching hatred.

In a video link from Washington D.C., Ambassador Ross told the participants that their deliberations “would have been wonderful if they had happened years ago,” but nevertheless he welcomed the initiative.

He said, “You represent the voices who say enough. The more voices like yours who are prepared to speak out, the more you will build your voice [in talking] with Israel, and the more you will influence Israel’s leaders. You represent a ray of hope: it is a courageous endeavor, but also the right endeavor, and I am inspired by your example. You know you are on the right path.”

My comment: this initiative is welcome,  but falls short of 'groundbreaking' because it does not address the elephant in the room: the Arab world's failure to engage directly with Israelis. Accounts of how well Jews and Arabs got on together and calls for Jews to return belong in the realm of fantasy: the Arab side needs to acknowledge that they need to talk to real Israelis, most of whom hail from Arab and Muslim countries. Oddly, Dennis Ross commends them for 'building a voice in order to influence Israel's leaders'  - what about the Arab world's leaders?


Boycotting Israel and its people has only strengthened both, while doing great harm to Arab countries, and not least to the Palestinians. For the sake of the region, it is long past time to move forward to a post boycott era.
That’s where the Arab Council for Regional Integration aims to go. The council formed this week in London and is made up of 32 civic actors from 15 Arab countries, including us. The council isn’t a government organization—members include heads of NGOs, prominent media figures, Muslim clerics, and even musicians. The only political figures who attended were a former Kuwaiti information minister and an Egyptian legislator who also heads a political party there. Regardless of profession, those gathered espoused a spirit of partnership that knows no borders and repudiates the culture of exclusion and demonization that has wreaked havoc across the Arab world. First on our list is the generations-old boycott of Israel and Israelis.
The boycott evolved in stages. In the mid-20th century, Arab elites enacted exclusionary policies against 900,000 Jews indigenous to Arab lands, culminating in their mass dispossession and forced migration. In the 1940s, the internal crackdown developed into an intergovernmental Arab effort to target the young country to which most of these Jews fled—Israel—through political, cultural and economic isolation. The goal was to uproot them and their European Jewish brethren from the area. Next came a ban on all civil engagement with Israelis, even and especially in countries nominally at peace with Israel.
The latest iteration is driven largely by foreigners: The Boycott, Divestment and Sanctions movement aims to drive a wedge between Israelis and their global partners. Each boycott has failed to defeat Israelis. Instead, the economic pressure inspired innovative responses that invigorated their economy and society.
But let us count the ways the boycotts have harmed Arab societies. They lost the economic benefits of forming partnerships with Israelis. Trade could provide desalination technology for parched Yemen or more investment in Jordan where unemployment rates are overwhelming. The exclusionary movement impeded Arabs from resolving tensions between Israelis and Palestinians. Hard-line “resistance” factions such as Hamas have enjoyed support from numerous powers, but those Palestinians striving justly and peacefully to build institutions for a future state can hardly find Arab partners. Nor have they been able to trade or form contracts with Israelis—which would have empowered them economically, and given them some leverage to move the area toward peace.
Worse still, the regional boycott of Israel became a template for excluding and marginalizing opposition in the Arab world. Ethnic and sectarian divisions hardened, hastening the disintegration of Syria, Iraq, Libya and Yemen.
To rebuild the region, we must break with this tragic history. Much of the media and many of the political institutions in the Arab world are waging a rhetorical war against Israel’s legitimacy in the public’s mind.