A forgotten pogrom agains the Jews of Tetuan, Morocco

Nineteenth century Morocco was a volatile country, and the Jews were often on the receiving end of violence from warring armies and tribes. European travellers have testified to their miserable and degraded existence.  Now the estimable blogger Elder of Ziyon has discovered evidence of a forgotten pogrom against the Jews of Tetuan in 1860. 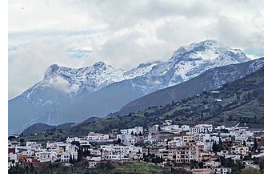 "In 1790, a pogrom happened, started by Sultan Yazid. The mellah was pillaged and many women raped. The Jews lived in a mellah, which is located inside the old medina. I cannot find any account that  corresponds to the horrors narrated in this article in The Occident, Thursday, April 05, 1860.

On February 6, 1860, Spanish soldiers who were then fighting in Morocco entered Tétouan, a town very close to the Straits of Gibraltar. Apparently the Sultan's soldiers got wind of an impending surrender and took the opportunity to attack the Jews of the city - stealing and breaking anything of value and raping the women, as happened 70 years earlier."

Here is an extract from a report by the Honorary Consul, Mr Nahon:

"In the night between Saturday and Sunday, the Moroccan soldiers and the Arabs entered the Jews' quarters, plundered all that was composed of gold and silver, broke every article of pottery and glass, burnt all that they could not carry away, destroyed the Sepharim and committed all sorts of horrors upon the women and children. On entering the city, the Spaniards found the women almost naked and half dead."

Read post in full
Posted by bataween at Monday, November 25, 2019