The festival of Succot brings the first rains

Succot is the festival where Jews are enjoined to live in structures open to the sky to recall the forty years which the Children of Israel spent in the desert before being allowed to enter the Promised Land. On the last day of the festival, Shemini Hag Atseret, Jews pray for rain.

But even the Muslims of Iraq were aware of this Jewish festival, which was associated with the first rain of the season. In fact some called it El Arazeel al Yehud. 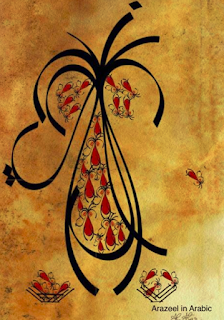 EL Arazeel al-Yahud by Ala Atar. As a child in Iraq he recalls his mother using the expression 'Arazeel al Yahud ' to describe a heavy rainfall (عرازيل اليهود)

A friend remembers how, each year, her family would erect a succah with four upright wooden beams in the middle of the garden in Baghdad. The walls consisted of date palm leaves tied at the top and base to horizontal beams. Pomegranates and oranges hung from the roof. The roof had a trellis, but it too was bedecked with palm leaves. The whole was decorated with coloured lights. My friend remembers there was a large table in the centre and divans on three sides of the succah so that the family could sleep there.
Posted by bataween at Friday, October 18, 2019