The Babylonian Jewry Heritage Centre in Or Yehuda is a hidden gem. It testifies to the millenial survival of Jews in present-day Iraq, their glories and tribulations, resulting in the community's extinction in the 20th century. Brian Schrauger writes about the centre in the Jerusalem Report (with thanks: Shimon) 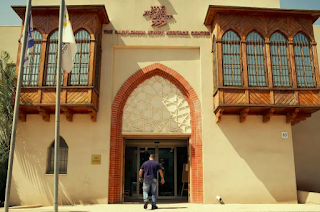 It was a hot summer day in Baghdad on August 8, 1971. Indeed, it was hot in more ways than one. Life had become dangerous for the few remaining Jews living in Iraq’s capital city.

Sami Dallal, 19, had to make a decision: stay for an interrogation by the antisemitic and murderously minded Ba’ath police, or, with his remaining family, make a break for Tehran? Today at the age of 67, Dallal tells me his story at the Babylonian Jewry Heritage Center, an attractive, modern museum in the central Israeli city of Or Yehuda (meaning the Light of Yehuda). Running parallel to one of Ben-Gurion Airport’s runways, jets were taking off every few minutes, at the same place where most Iraqi Jewish refugees, destitute, arrived in Israel in an exodus that began in 1948, peaked in 1951, and ended in the early ’70s.

The Babylonian Jewry Center is a hidden gem, unknown even to many Israelis. Established in 1973, the museum is laid out as an Iraqi villa like the ones in which wealthy Iraqi Jews once lived. The design is appropriate. Far from feeling like a memorial to what was, the center is a place vibrating with the life of Jews who lived in Iraq for 2,600 years.

Read article in full
Posted by bataween at Tuesday, October 22, 2019