Marcelle Ninio, one of six Israeli spies formerly jailed in Egypt in the infamous Lavon Affair of the 1950s,  has died at the age of 90.  The operation caused no casualties but much consternation, and provoled a political crisis in Israel. The Times of Israel reports: 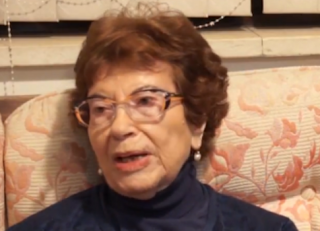 In the Lavon Affair, known commonly in Israel as “The Bad Business” (“Esek Habish”) and officially named Operation Susannah, Israeli spymasters, acting without the knowledge of Prime Minister Moshe Sharett, recruited Egyptian Jews to carry out false flag terror attacks against civilian targets in the country in order to destabilize the rule of President Gamal Abdel Nasser.

However, the operation failed, eight cell members were imprisoned and two others were executed. Ninio, who served as a liaison between cell members and was the only woman in the squad, spent 14 years in an Egyptian prison for her actions.

Operation Susannah was launched due to Israel’s concerns over Washington and London’s good relations with Nasser, and particularly British authorities’ plans to evacuate their forces from the Suez Canal.

Read article in full
Posted by bataween at Sunday, October 27, 2019

The point of this historical affair is, that even when Moshe Dayan had the opportunity in 1956 (following Suez Crisis) to exchange the Operation Suzanna's detainees against thousands of egyptian captive soldiers - among them the Egyptian Judge who gave the terrible sentence - Dayan refused. It was only 11 years later, when Meir Amit was Head of the Mossad in 1967, that the exchange occured. Just one year before Marcel Ninio would have been free anyway. She was full of resentments about that for many years, blaming those who let her lose her youth and lose her chance to be a mother. But on her last years of life, she let go and forgave everything. All those who approached her said: she was a great Lady. Yehi Zikhra Barukh.