It is almost unprecedented for the BBC to cover Jews from Arab countries at length, yet its website has been focusing on Jews of Sudan recently in the wake of the government's call for them to return. All this was made possible by Daisy Abboudi, who has systematically been collecting interviews for her blog, Tales of Jewish Sudan (with thanks: Ron): 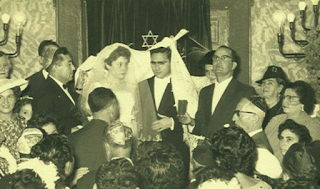 A wedding in Sudan

"Twenty fifth of May 1965," he said with certainty when talking about his departure. At that time, things were getting increasingly difficult for Jewish people because of growing anti-Semitism.

"There was chaos... I remember one time we closed ourselves up in our home, and they were throwing stones at us, at our home."

David decided he could no longer stay in the country. "I closed my [textile] store at nine o'clock at night as usual, I told my friends, my neighbours: 'See you in the morning.' And then I went straight to the airport and went to Greece."

From there he went to Israel. David's departure was part of a movement of Jewish people that saw a community thought to have numbered 1,000 just a few years earlier reduced to just a handful by 1973.

That was the result of a changing political situation in Sudan from 1956. A rising anti-Israel sentiment meant most Jews no longer felt safe there. This rapid decline mirrored its rapid growth just a few decades earlier.

When Miss Khartoum was a Jew - and other tales