Halle shooting reminds Tunisian Jews of a darker past

The German city of Halle was the scene of a terrorist attack over Yom Kippur on Wednesday  9 October  2019 which claimed two lives. But the city conjures up dark wartime associations for Tunisian Jewry - as academic, writer and journalist Jean-Pierre Allali reminds us.

It was in Halle that three Jews from Tunisia,  Joseph Scemla and his two sons, Gilbert and Jean, were beheaded. Tunisia had been occupied for six months by the Germans (from 23 November 1942 to 7 May 1943). Fierce opponents of Nazism, the Scemlas had decided to join the 2nd Armoured Division of General Leclerc's army.

They made the fatal mistake of trusting one Hassan Ferjani, who gave them away to the Nazis.  Arrested on 10 March 1943, the three men were first imprisoned in Tunis, then in Berlin before being deported to Dachau. Judged by a military court, they were sentenced to death for espionage.The three Scemlas of Tunis were beheaded in Halle. The father was forced to attend the execution of his two sons.

As a student of mathematics in Tunis, I had a friend, Frédéric Gasquet. I  knew he was the son of Gilbert Scemla. His mother, a Jewess of Russian origin, Lila Vilenkine, respecting the last wishes of her husband, had married Louis Gasquet who adopted the young Frédéric and gave him his name. When Frédéric reached adulthood, he threw himself into the search for the truth about the fate of the three Scemlas. I did my best to help him by  sharing any information I had.  At the end of his quest, that led him to visit Halle several times, he published a book whose title translates from the French as: " My father's letter: A family from Tunis in Nazi  hell" (Introduction by Serge Klarsfeld, Feline Editions 2006). 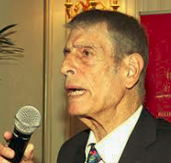 In this book, he thanks me me for my advice and information. With much perseverance, Frédéric Gasquet found the graves of Joseph and Jean Scemla at Stutthof camp. The  body of Gilbert Scemla was used by the Medical Institute of Halle and  had been buried in a common grave. After the liberation,  a French Military Court sentenced  Hassan Ferjani  to death and forced labour. This was commuted to twenty years in prison. He ended up being pardoned, shortly after Tunisia gained its independence, by president Habib Bourguiba. I myself told the tragedy of the Scemlas in my book whose title translates from French as "The Jews of Tunisia under the German boot" (Editions Glyph Glyph 2014. Introduction by Elie Wiesel).
Posted by bataween at Friday, October 11, 2019

What a harrowing account. I think that the reference to Struthof camp should be Stutthof.