Buffeted by Egyptian winds of exile

At last the historian Bat Ye'or has published the novel she had always wanted to write: it covers all aspects of the exodus from Egypt, the defining experience of her life. Lyn Julius reviews Le Dernier Khamsin in the Times of Israel:

‘There is hatred for everything that is different,’ a friend tells the incredulous young woman, as their world collapses around them in Nasser’s Egypt.

Le dernier Khamsin des juifs d'Egypte  is the novel (in French) which the author Bat  Ye’or ( her pen name, meaning Daughter of the Nile) had always wanted to write. Instead  the Cairo-born  Jewess’s  life was thrown off course by her pioneering research into the dhimmi, the subaltern status of Jews and Christians under Islam.

The Hamsin is the hot wind blowing in to Egypt  from the Sahara. For the 80,000 Jews of Egypt, riots combine with state-sanctioned persecution to blow this age-old community out of the country, never to return. The book is written in an impressionistic style but is nuanced and covers all aspects of the exodus. 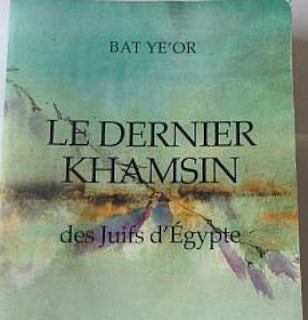 It is heavily autobiographical. Arriving in 1957 as a young refugee in London to study at the Institute Z, Elly ( Bat Ye’or) comes from a well-heeled family. Now she is struggling to survive on a handout of eight pounds a month. Depressed in the cold and the fog, she tries to make sense of what has happened. She is haunted by flashbacks and ghosts from her Egyptian past. Her long-dead,  observant  relatives are resigned to their fate, but Elly, of a new breed of educated, secular, independent women,  can’t accept that Egyptian Jewish life is being wiped out.

Elly’s father is burning their family archives lest they be accused of Zionism before their hurried departure. They can’t leave without signing a declaration forfeiting their property.

The storm has been brewing for 100 years. Egyptian nationality was only granted to those who could prove roots going back to 1845.

Elly’s friends at the equestrian club reflect the Egyptian upper crust : there are French, Syrian Christians, wealthy Muslims. Some want her to stay. Many see no future. One tells her to go to Europe. Another to Israel, the place that dares not be named.

Elly bears no grudge towards the noble and brave Egyptian people. It is Nasser and his cronies who are to blame for the Jews’ plight. There are Muslims who saved Jews from lethal riots.

The events of 1967, when the regime exacted its revenge on the remains of the community, merge with those of 1956. The book”s most moving episode is Eliyahu Cohen’s story. He is one of 400 Jewish males jailed by Nasser as Israel POWs. They are incarcerated 72 to a cell which measures 8×4 m. They are given food infested with cockroaches. Some are tortured or sodomised. It’s an experience Eliyahu cannot live with.

Ultimately, the story holds out hope. Forced exile can lead to hell  –  or to redemption. The Egyptian Jews have rebuilt their lives, and none wants to return.

Read article in full
Posted by bataween at Friday, October 25, 2019