Sephardi weddings past and present in Izmir, Turkey

A hearty besimantov to Beni and Veronica, who were married in Izmir  on 1 September 2019 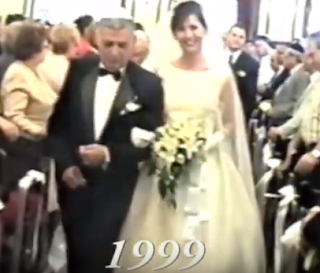 These two Youtube videos give a fascinating insight into Sephardi wedding rituals practised by the Jewish community of Izmir, Turkey over the decades.

As in other communities, weddings have become fancier: Ceremonies once  celebrated at home now take place in luxury hotels.

Similarly, the tevila, or ritual bath preceding the marriage,  used to take place at home. Now the bride immerses herself in the synagogue mikveh. A rosca (kind of beigel or cracker) is broken over the head of the bride to bring good luck.

The father of the bridegroom would send musicians to the bride's house in order to escort her to the wedding ceremony.  Another ritual is the breaking of the kezada, a round cake  of marzipan, containing three little birds. Pieces would be handed out to the single guests.

The community once saw four or five weddings take place in a single day. Nowadays, numbers have dwindled to such an extent that Izmir is lucky to witness four or five Jewish weddings a year. There might come a time when no Jews live in Izmir any longer, says one lady. But the unique heritage and culture of Turkish Jews will be preserved.