Netanyahu: 'we are not strangers in Hebron'

For the first time, as reported by the Times of Israel, an Israeli prime minister visited Hebron to mark the 90th anniversary of the 1929 massacre. The Jews of that city were evacuated soon afterwards and did not return until  after 1967. 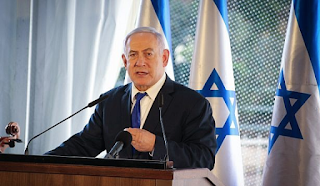 HEBRON, West Bank — During a rare visit to Hebron on Wednesday, Prime Minister Benjamin Netanyahu declared that Israelis would remain in the flashpoint West Bank city forever, but stopped short of announcing new construction in the area as Jewish locals and right-wing lawmakers have been demanding.

The premier also entered the Tomb of Patriarchs, along with his wife Sara, in what was his first visit there as prime minister. “Hebron will never be cleansed of Jews… We are not strangers in Hebron. We will remain here forever,”

Netanyahu declared at a ceremony marking the 90th anniversary of the Hebron massacre, in which Arab rioters murdered 67 of their Jewish neighbors in the ancient city.

Read article in full
Posted by bataween at Thursday, September 05, 2019