Morocco World News has been poohpooh-ing an article in The Times of Israel about an Israeli called Martha Retthig who is giving financial support to an Amazigh (Berber) called Mohamed.  The implication is that the Zionists are trying to subvert Morocco's quiet Atlas villages and to foster Amazigh nationalism which, it claims, only a small minority supports. In order to affirm Moroccan loyalty to the Palestinian cause, the article alleges that relations between Morocco and Israel are going through a rough patch.

Mohamed’s village and his last name are not revealed because, the Israeli paper writes, his university teachers and friends—and even perhaps his neighbors—will surely harm him if they knew that he is pro-Israel or his family and education is sustained by Israeli generosity.

“Some people here are crazy and I’m afraid for my safety. Please don’t use my pics or family name I beg you, because it’s serious here,” Mohamed  told the newspaper shortly before they ran the report. 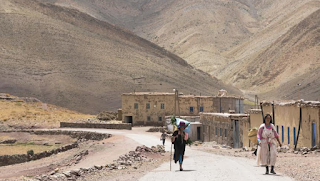 What is “serious,” the piece comments throughout, is both the unbearable lives of the village-dwelling Amazigh and the supposed Arab supremacy under which they live. They have been “Arabized” and “Islamized” and are denied access to Morocco’s most visible jobs and government positions, the kinds of promotion that bring political and economic clout.

Rettig and Mohamed met on Facebook and the Israeli woman was immediately “touched” by his life story. But implied in the larger narrative of the story is a supposed historical affinity between Jews and Berbers. This is based on the claim that Islam and Arabs somehow constitute an existential threat to the survival of both peoples.

According to Rettig, while Jews have relatively stood the challenge (mainly after the creation of the State of Israel), the article implied, Amazigh are still living under Arab religious and socio-political hegemony. The report claims that Amazigh identify with Israel’s fight for legitimacy, which they equal to their own long standing struggle against Arab supremacy.

“There are huge natural resources, and the [Arab] leadership has all the control over it. They have not at any time invested in infrastructure for the Amazigh population,” Rettig told the Israeli newspaper.

“Many Amazigh have become so Arabized through an intentional move by the Arab leadership over the last 60 years or so.” At some point in the report, Mohamed is also presented an activist for Amazigh rights and Amazigh self-determination. The movement seeks, according to the report, an Amazigh awakening in Morocco. It wants to force its tribesmen out of the alleged identity slumber in which they have been plunged by Morocco’s state-sponsored Arabization and Islamization policies.

So pervasive and entrenched is Morocco’s Arab and Islamic identity, Rettig said, that “a large number of Amazigh don’t speak the language nor feel the need to reanimate the culture.” More still, the report commented, some Moroccans “of Amazigh heritage who no longer identify as such, can be hostile, and even violent, to people involved in the [Amazigh autonomy] movement.”

Read article in full
Posted by bataween at Thursday, September 19, 2019

As a supporter of Amazigh liberation myself, I wish I was rich enough to give him financial help. I just wish him the best.