They were young and in love. It was their secret. But now they were about to be separated. She had been offered a place on a flight as part of the 'Operation Magic Carpet' Operation. But he could yet secure one; they were giving priority to the women. He didn't want to be separated from her and risk losing her. He had to get on that flight! So he disguised himself as a woman. And in that way, he followed her to Israel where they married. 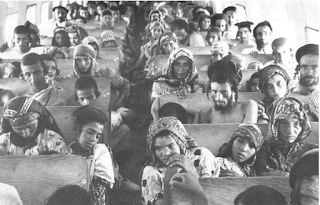 Yemenite Jews being airlifted to Israel during Operation Magic Carpet.

This is the story of the grandparents of one visitor to the Aden Jewish Heritage Museum in Tel Aviv, as told to the Museum manager Sarah Ansbacher. Israeli-born, the granddaughter has Adeni roots on one side, Polish Holocaust survivors on the other. And she came to visit together with her husband whose roots are from Germany on one side and Iraqi on the other....

It is 70 years since the start of  Operation Magic Carpet. This is a widely known nickname for Operation 'On Wings of Eagles' (Hebrew: כנפי נשרים‎, Kanfei Nesharim). This operation between June 1949 and September 1950  brought 49,000 Yemenite Jews to the new state of Israel.

During its course, the overwhelming majority of Yemenite Jews – some 47,000 from Yemen, 1,500 from Aden, as well as 500 from Djibouti and Eritrea and some 2,000 Jews from Saudi Arabia– were airlifted to Israel. British and American transport planes made some 380 flights from Aden, in a secret operation that was not made public until several months after it was over.

Another story from the Aden Jewish Heritage Museum
Posted by bataween at Friday, September 06, 2019