This is an honest overview by Mohamed Chtatou in Eurasia Review of the contribution of the Jewish exiles from Spain (Megorashim) to Moroccan society, culture and commerce. Today this huge Jewish influence  is recognised in the 2011 Moroccan constitution. (With thanks: Michelle)


A golden age of Judaism emerged under the Ummayads of Cordoba (756-1031); and the “adaptability of the Jew” proved forthright: Jews learned Arabic, climbed the socio-political ladder and held powerful positions in the palace as trusted advisors, controlled trade and maintained prestigious occupations.

The dhimmis were not supposed to be above Muslims in theory, this was commonly the practice in Moorish Spain. The Kingdom of Grenada, for instance, had a Muslim Emir and a Jewish vizier named Samuel ha-Naguid (d. 1056) 11, who was succeeded by his son Joseph.  This was not without retribution and indeed sparked a pogrom resulting in the death of 5,000 Jews and destruction of their quarter. Conditions oscillated under the Taifa kings, and worsened under the puritan rule of the Almoravid (1040-1147) and Almohad (1121-1269) dynasties.

Dhimmi Jews fared better under the Almoravids despite dhimmi status and regulations than the Almohads, wherein thousands of Jews were killed between 1130 and 1232, convert or death threatened again in 1147, Mellahs were created and the yellow star on clothing enforced; this encouraged many prominent Jewish families and figures (i.e. Abraham Ibn Exa, Seti Fatma, Juda Habri, Maimonides) to flee Spain. Thus, the dynasties’ relationship with the Megorashim shifted from coexistence, uneasy toleration, to brutal persecution throughout the centuries.

But the Jews by and large persevered until the Christian conquest in 1492.  Upon their expulsion, the Sultan of Morocco, Muhammad Sheikh al Wattasi, was amenable to the new arrivals and recognized the Megorashim as valuable assets. They were ushered into positions of authority as administrators, palace advisers in foreign and military affairs, and leaders in trade and commerce. They also thrived as doctors and moneylenders, especially in Fez, Sefrou 12, Marrakech, and Essaouria. Although the local Tovashim, rural and urban, had flourished in Morocco since the fall of the Temple in 70 AD, the Wattassid favored the new arrivals due to their education and sophistication. Animosity between the two Jewish communities grew, especially since the Megorashim spoke Hekitia (mixture of Spanish, Hebrew and Darija) and refused to speak Darija 13. They initially settled in Fez and the southern regions, while the Tovashim remained in the northern cities and rural areas. The two communities lived separately until the 18th century. 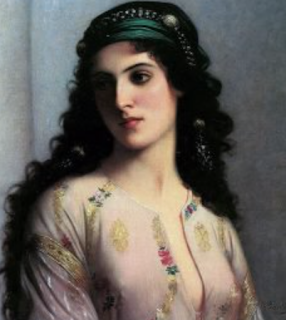 Jewish woman of Tangiers, painted by Charles Landelle
Jews, also, monopolized maritime trade and banking under Sa’di dynasty (1554-1655) and conducted business and diplomacy on the Sultan’s behalf. Moranos migrating to Morocco later on to Fez 14, Tetuan and Meknes developed the sugarcane industry and developed the tea trade with India and China propelling the Barbary state into prosperity. Rural Jews developed the caravan trade (gold, ostrich, feathers and women) in Fez and Sefrou as they were the trusted guides (azettat in Tamazight (Amazigh/Berber language)) and expert negotiators.

During Portuguese occupation of Safi and Azemmour, the Megorashim served as translators and negotiators, contributing to the roots of the would-be protégé system of the 19th century in Morocco. Megorashim adapted to Morocco, but they also infused their culture into the local milieu. So much so that within a few centuries it was indistinguishable from Moroccan culture. This included the “culture of expulsion”, especially Andalusian music and poetry from Grenada and Cordoba.

The music stressed Kebbala spirituality that found easy reception with Sufism. Cuisines also overlapped and were no longer distinct, including sardine and garlic recipes of Safi and Essaouria; Mahya fig liquor; and baqeeya (Paella), just to name a few. Clothing customs also merged, most noticeably the colorful kaftans with gold embroidery worn by Moroccan brides.

https://en.wikipedia.org/wiki/Haketia
A type of Ladino
--malca