It's an indication of how far Egyptian policy has moved: it is now to show solidarity with  Israel. Instead of defending the Egyptian judoka who lost to Israeli Sagi Muki at a recent contest in Tokyo, the Egyptian government has criticised him for refusing to shake hands. Haaretz reports: 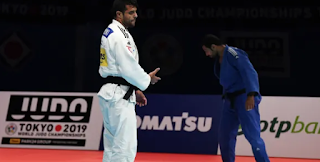 The Egyptian Foreign Ministry has criticized an Egyptian judoka, Mohamed Abdelaal, for refusing to shake the hand of his Israeli opponent, Sagi Muki, who defeated the Egyptian in the semifinals of the World Judo Championships. The Israeli went on to win the championship on Wednesday.

Despite Muki's historic gold medal on Wednesday at the World Judo Championships in Tokyo, Arab sports media devoted much of their attention to Abdelaal. Following his loss, Abdelaal refused to shake hands with Muki, who had extended his own hand. For its part, the Egyptian Foreign Ministry issued a statement that "sports needs to be kept separate from politics."

On Thursday, Egyptian Judo Federation Vice President Marzouk Ali issued a statement saying that the Abdelaal's refusal to shake Muki's hand was the result of unfairness in the Egyptian's loss. "There was injustice behind Abdelaal's loss," Ali said. "The Israeli should have lost, which didn't happen, and the Egyptian judoka therefore didn't shake his hand."

Iranian Judoka defects after being pressed not to face Israeli (Jerusalem Post)
Posted by bataween at Monday, September 02, 2019